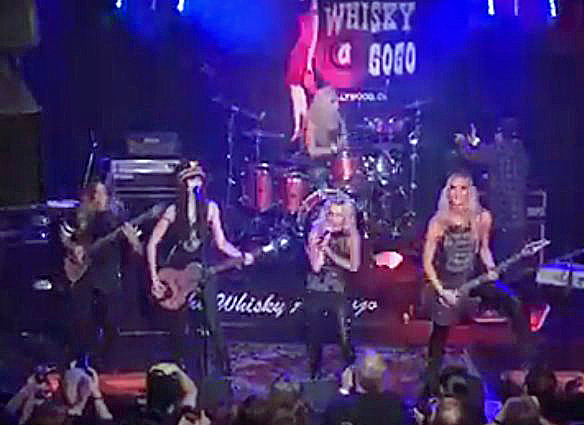 WE START WARS, the new all-female group led by Nita Strauss, the Los Angeles-based guitar shredder for the ALICE COOPER band, made its live debut this past Thursday, May 25 at the Whisky A Go Go in West Hollywood, California. Fan-filmed video footage of the concert can be seen below.

In addition to Nita, WE START WARS features Alicia Vigil (VIGIL OF WAR) on bass, Seana (a.k.a. Shauna Lisse) on vocals, Nicole Papastavrou on guitar, Katt Scarlett (FEMME FATALE) on keyboards and Lindsay Martin on drums.

Asked how WE START WARS came together, Strauss told The Front Row Report at last weekend's Rock On The Range festival in Columbus, Ohio: "WE START WARS, I always say it's the band I've always wanted to be in. When I was a young guitar player starting out, there wasn't really a lot of all-female bands that had a really high level of technique for me to look up to. I love Steve Vai, [Joe] Satriani, DREAM THEATER… That's my stuff, that's what I like to listen to. And the more I started to figure out, there's not a lot of all-female bands that play this kind of stuff, that play technical stuff. There's some incredible all-female bands and I'm not knocking all-girl bands by any stretch of the imagination. But I wanted one that was really technical. I wanted a drummer that plays really fast double bass. I wanted two guitar players that both play solos. I wanted a singer with a big range — which you have… Female bands have great singers. My keyboard player went to Berklee — [she's] an incredible musician. So I really got the full spectrum of great musicianship first and foremost, and that's what I'm really excited to showcase for the fans."

According to Nita, part of the reason she didn't launch WE START WARS earlier is the fact that quality female musicians are hard to come by. "A lot of times [when] I do press, I get this sort of snarky [question from interviewers], 'Well, why did it take you so long to put a band together?'" she said. "And I [usually tell them], 'How many female drummers do you know that live in this small area…?' I mean, I wanted to get local people to L.A., where I live. I didn't wanna bring people in from out of town. I've done it, and I always end up paying for their flight, and I just can't do it. So I really wanted to get local people that could be in a room in rehearsal when I'm gone. 'Cause I'm gone most of the year with Alice. So the girls in my band are super dedicated. They've been in the studio every day… a couple of times a week since I've been on this tour, and they're hitting it hard. So we're ready for the show."

Regarding the band's sound, Papastavrou told Guitar World: "I'd say it's super-melodic metal but also has a little bit of something for everyone. We wanted to broaden our audience — not do anything too aggressive, but there's still a little bit of heaviness in there." Strauss concurred, adding: "There's a lot of crossover appeal. Nicole and I probably have the heaviest influences in the band, but when it comes down to it, we make music a lot of people can enjoy."

WE START WARS' first single, "The Animal Inside", can be streamed below.

Strauss said of the band's name: "A phrase I heard years ago has always stuck with me: 'Some of the greatest wars in history were fought over a beautiful woman.'

"I've always been fascinated by the idea of the female warrior, someone who fights her own battles and doesn't take shit from anyone, and equally fascinated with the concept that a woman's love or defending her honor would be worth so much that people would actually put their own lives and the lives of others at risk over it. The most famous story everyone thinks of first is, of course, 'The face that launched a thousand ships,' Helen of Troy. But there was also Cleopatra and Marc Antony, Attila the Hun's invasion of Rome, Richard the Lionheart rescuing his sister Joan of England during the crusades, General Wu Sangui's betrayal, which led to the downfall of the Ming Dynasty in the 1600s, and the Celts uprising against the Roman Empire in AD 60. The list goes on and on.

Debut show for
We Start Wars
at the Whisky

DMT out supporting Nita Strauss and We Start Wars at the Whisky A Go-Go in Hollywood! 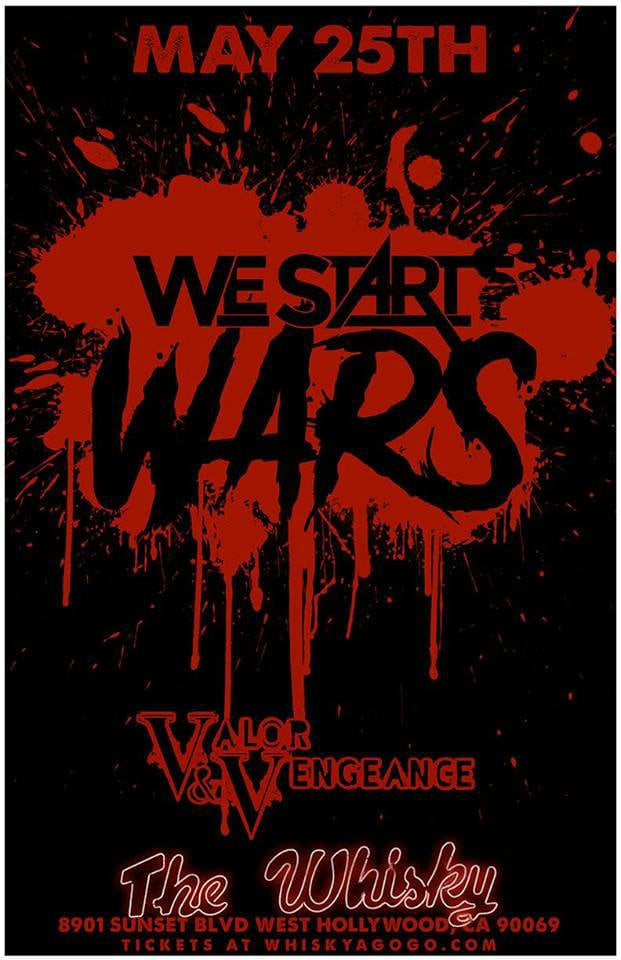