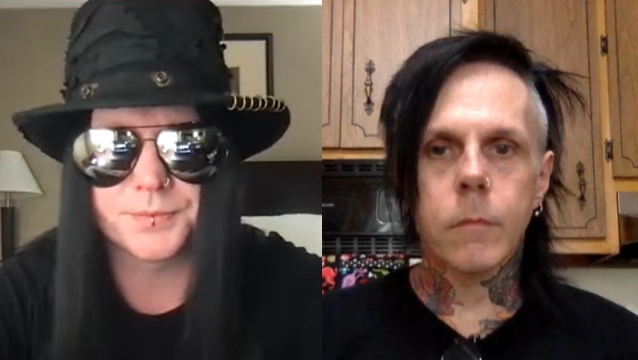 WEDNESDAY 13 Vows To 'Put An End' To MURDERDOLLS Trademark Dispute, Says JOEY JORDISON 'Would Be Furious'

In August, it was announced that Slade and former MURDERDOLLS bassist Eric Griffin would take part in a signing at the Silver Scream convention at the Hilton Double Tree North Shore in Danvers, Massachusetts to celebrate the 20th anniversary of the release of MURDERDOLLS' first album, "Beyond The Valley Of The Murderdolls". The event was slated to be livestreamed on several platforms, including YouTube, TikTok and Instagram. Acey and Eric were also going to be doing a meet-and-greet after the announcement for those in attendance at Silver Scream Con. In addition, Acey and Eric launched a web site, murderdollsofficial.com, that purports to cater to all of the MURDERDOLLS alumni and their legion of fans affectionally known as The Ghoulscouts.

On August 25, Wednesday 13 took to his social media to throw shade at his former bandmates, insisting that any merchandise being advertised using the MURDERDOLLS logos, music and lyrics is unapproved and unauthorized. Two days later (August 27),Acey responded to Wednesday, saying that the re-release of "Beyond The Valley Of The Murderdolls" is officially licensed after he went through a "time-consuming and expensive" process reinstating the assets from Warner Music Group which fully acquired Roadrunner Records in 2010 after first buying 73.5% of the company in January 2007. He also invited all former member of the MURDERDOLLS to "use the band as a platform for their own endeavors". (See Acey's full statement below.)

On August 28, Wednesday 13 once again took to his social media to clarify his position on the MURDERDOLLS dispute. He wrote: "Hello everyone, I want to take a moment to explain my comments this week on this MURDERDOLLS situation.

"The first album released in 2002, all music was written by Joey and I. The only other member to contribute to this record was Tripp [Eisen] with a few guitar solos. All other instruments/vocals are performed by Joey and Wednesday. We assembled the touring lineup after the recording was finished consisting of Eric, Ben and Acey.

"The band went on hiatus eight years after this and returned in 2010 with the sophomore MURDERDOLLS album. This album and touring lineup did not feature any of the touring members from the first album. This was decided by Joey, as his decision to only have he and I photographed on that album.

"This was Joey's band, he invited me into this world, and I am able to do what I do today because of him and the MURDERDOLLS name, and that's what this whole situation is about.

"MURDERDOLLS trademark had lapsed. This was unknown to Joey or I as the band was inactive and no one was watching for this. However it seems Acey was watching for it, and applied for the MD trademark to take the name behind our backs. Acey succeeded in gaining the trademark. He applied for this trademark 1 year before I was notified and a year before Joey's passing. He never notified Joey about this, as he knew he would be furious and not approve.

"There's no other way I can view this other than he stole the name from Joey. He is now launching websites, merchandise, and our first album as Official MURDERDOLLS, erasing my name out of the bio/ history of the band.

"It's sad that I've had to make this a public discussion, but that's where we are. I'm not involved with this situation because I chose not to be involved with it. It doesn't sit well with me and I cannot get behind it."

Wednesday 13 elaborated on his ongoing dispute with Slade in a new interview with the Neil Jones Rock Show on TotalRock. He said (as transcribed by BLABBERMOUTH.NET): "I don't think people understand exactly the details of it and why it's so frustrating and it bothers me.

"My buddy Joey Jordison, who passed away last year, MURDERDOLLS was his band that he made with me; he invited me to be a part of that. The other guys involved with that band were touring musicians… But the main two guys that wrote that music was he and I.

"Joey, as we all know, passed away last year, but before that, Joey was going through some health issues — he was on a cane; he couldn't play drums. And this guy came in while Joey was sick and stole the name from him, underneath him, a year and a half before he died. And his intentions were to hijack the band and steal it, whether Joey or I approved of it. But Joey died, so now he tells everybody, 'I did this for Joey. I took the name for Joey. I wanted the legacy for Joey.' It's a fucking lie. That guy is a thief. And I will spend the rest of my days fighting him on this. And that guy can fuck off."

When interviewer Neil Jones noted that the whole thing feels like a "cash grab," Wednesday responded: "It's one hundred percent cash grab. The guy told me that; he told me that's what it is."

Asked if he feels he owes it to his friend Joey to get the trademark away from Slade's control, Wednesday said: "One hundred percent. And that's why I'm doing this. Because I know Joey very well — I knew him better than a lot of people did — and I know that he would be furious. And so I have to speak for myself and I have to speak for him because no one else is. And like I said, it's just a stupid, unfortunate situation, and I will put an end to it; I promise you that."

"We waited around a long time — myself, Eric and the Ghoul — we waited around a long time to do this record. And when Joey and Wednesday said that they wanted to do it by themselves, that was a bit of a… like, 'Really?! That's not what we discussed,'" he said. "But, quite frankly, it's like, okay, well, it's been seven years. You can't hold somebody to something they said seven years ago. It's like, 'Okay, cool.'"

Acey went on to say that he didn't like the material on "Women And Children Last". "I think it sounds like all the things that the band said that we weren't gonna be," he said. "When I was in the band, it was, 'We don't drop-tune — we tune standard 'cause we're a rock band — it's all tongue-in-cheek, nothing's serious. And now it's drop-tuned, it's serious subject matter, and it's not something I wanted to be a part of. It's like, wow, we were supposed to be a fun band that pissed people off, not a pissed off band that is writing… I don't know… It sounds like DISTURBED to me. It sounds like DISTURBED with Rob Zombie vocals. That was the other thing, too. [Laughs] Everybody was, like, 'You guys are like ALICE COOPER meets ROB ZOMBIE,' and we weren't. And it seems like all the negative things that people thought about us before they heard us, the band has now become. I'm not interested in that. I have a lot more creativity than that. And those guys do, too. So I'm a little disappointed for them. But you know, hey…. whatever. I guess they're happy doing it, but it's not something that I would wanna be a part of. And it's, like, weird, the whole Joey and Wednesday… They've got pictures of just Joey and Wednesday. I think it's pretty clear that they didn't want anyone else at the party; they want it to be an exclusive thing for them, I suppose."

Acey here and I would just like to clear the air on some things.

The Murderdolls as a band does not…

It’s unfortunate that this has to be said, but here it is:

Murderdolls was created in 2002 by Joey Jordison and…