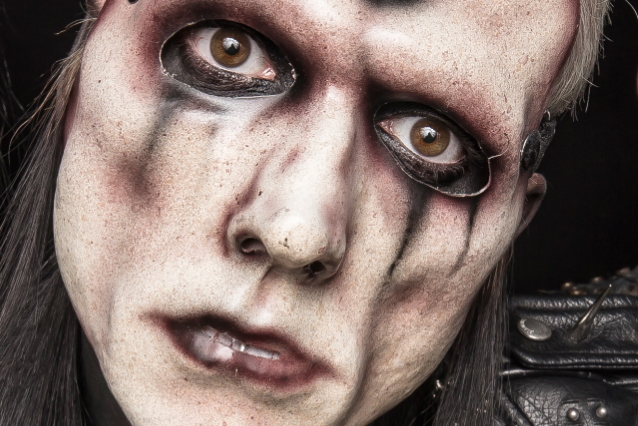 Horror-punk stalwart Wednesday 13 spoke to Sticks For Stones about his decision to cover W.A.S.P.'s classic song "Animal (Fuck Like A Beast)" for his upcoming album, "Necrophaze", due on September 27 via Nuclear Blast Records.

"I've been a W.A.S.P. since I can remember," Wednesday 13 said (hear audio below). "We were talking about doing some cover songs. I think our drummer just went and did a demo of it and it sounded cool and it got on the list of songs to do. And we ended up tracking it, and it turned out super cool.

"I was so happy to do a W.A.S.P. song and that song in particular," he continued. "Is it my favorite W.A.S.P. song? No. But it was the one W.A.S.P. song — the No. 1 [song on a] list of 30 songs. And that album cover — it was just such a slap in the face of the P.M.R.C. [activist group Parents Music Resource Center] and all that back in the '80s; it caused a lot of trouble. And I thought, 'What better band to cover that and keep spreading the trouble but us?' No one's ever covered that that I've known of, so we did it. And it's a song so bad, Blackie [Lawless, W.A.S.P. leader] won't even play it to this day. So it must be bad. It's a dirty job. Somebody's gotta do it. I took the job."

Described in a press release as "the most elaborate" album Wednesday has created under his own name, "Necrophaze" was recorded by Michael Spreitzer, who is the producer, recording engineer and longtime guitarist of DEVILDRIVER, and is the first WEDNESDAY 13 record to feature guest spots, which include performances by Alice Cooper, Roy Mayorga of STONE SOUR (who provides an eerie, authentic, '80s-inspired synth soundtrack-score to the album), Alexi Laiho of CHILDREN OF BODOM, and Cristina Scabbia of LACUNA COIL. Also making an appearance on the album is Jeff Clayton, member of legendary punk bands ANTISEEN and GG Allin's MURDER JUNKIES.