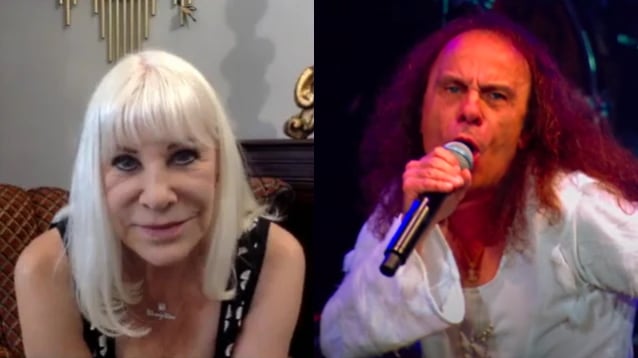 In a new interview with Sakis Fragos of Rock Hard Greece, Wendy Dio, widow and longtime manager of Ronnie James Dio, said that she never got divorced from the legendary heavy metal singer, despite Internet rumors to the contrary. "I never was divorced," she clarified (as transcribed by BLABBERMOUTH.NET). "I don't know where that came from. Anybody who can find the divorce papers, I'll give 'em a million dollars. We were never divorced. We may have split sometimes and gone back together. It's very hard to be married to a musician and to manage them. We parted ways and we came back together; we were always together. [We] never, ever, ever [were] divorced or even talked about divorce. And Ronnie would be very upset if somebody said that. I don't know where that came rumor came [from]. I think [former DIO guitarist] Vivian Campbell said it for some reason; why, I have no idea."

When asked if it was hard to work with Ronnie during those times when they weren't together as a couple, Wendy said: "No. 'Cause business is business and our personal life was our personal life. We got on really well with it because I never interfered with Ronnie's music; he never interfered with my business. And we had one goal; that was it. We had one goal, and it was for Ronnie's success in his business and his music."

Back in September 2012, Wendy reportedly married her then-boyfriend, Omar Gimenez, in a private ceremony among family and friends in Montecito, California. Étoile Weddings, which took care of the planning for the event, tweeted out a photo that was taken immediately after the wedding.

Earlier this year, Wendy was asked by Entertainment Focus which of Ronnie's albums she was most proud of. "I would have to say [DIO's] 'Holy Diver' which was the album I was also most involved in," she said. "I loved his work with RAINBOW and [BLACK] SABBATH but we worked really, really hard on 'Holy Diver'. We had no idea whether it would be a success or what it was going to do. We ended up mortgaging our house to be able to buy the stage set that Ronnie wanted to tour the album with as well. Seeing the way the fans accepted DIO and the success he had with 'Holy Diver' gives me goosebumps, even today, when I think about it."

Regarding what it was like to manage Ronnie's career when DIO first formed, Wendy said: "I was working in the background, working very hard, but in the background. I had to learn so fast and largely 'on the job' too. Believe me, there were no women managers in rock music back then — just myself and Sharon Osbourne. All the men would tell us that we didn’t know what we were doing. I just very sweetly smiled and accepted what they said and then went and did it my own way. Sharon, on the other hand, would tell them to 'eff off' and then went and did it her way. [Laughs] We both succeeded in different ways. [Laughs] I had so many arguments with men in the industry back in those days. Some of the promoters I had to deal with were, like, 'That's nice, love, but can we speak to a man, please?' I'm a strong person, and being with Ronnie made me a stronger person because he always had my back."

Wendy recently said that a Ronnie James Dio museum is "in the works," to be opened on Sunset Boulevard in Los Angeles.

Back in September 2018, Wendy teamed up with Julien's Auctions and offered 666 items from the rock icon's personal collection, including stage props, instruments used over the years, swords, medieval art and more. The auction took place at Hard Rock Cafe New York. Fans were able to score some unlikely items, including Dio's 1993 passport.

The first-ever career-spanning documentary on the life and times of Ronnie James Dio was presented in more than 500 cinemas worldwide by Trafalgar Releasing and BMG for two days on September 28 and October 2. Executive-produced by Wendy and fully authorized by the artist's estate, "Dio: Dreamers Never Die" delves deep into the singer's incredible rise from a '50s doo-wop crooner to his early rock days in ELF and Ritchie Blackmore's RAINBOW, to replacing Ozzy Osbourne in BLACK SABBATH, and finally cementing his rock star status with his own band, DIO. The film incorporates never-before-seen footage and personal photos, as well as offering intimate scenes with his closest peers, family, and friends, among them Wendy, Tony Iommi, Geezer Butler, Glenn Hughes, Vinny Appice, Lita Ford, Rob Halford, Sebastian Bach, Eddie Trunk and Jack Black, as they bring viewers inside the life of one of rock and roll's true heroes and one of the most beloved figures in rock.