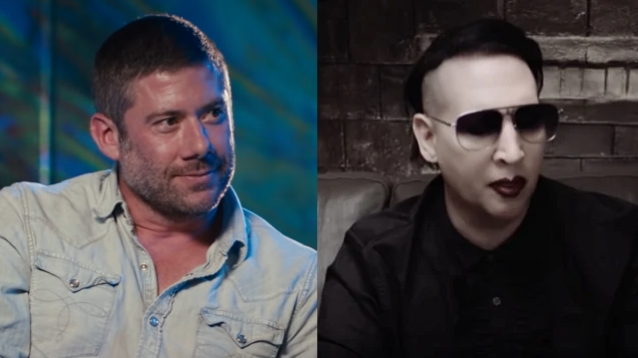 LIMP BIZKIT guitarist Wes Borland has blasted Marilyn Manson, calling him "a bad fucking guy" who "needs to come to terms with his demons."

Borland, who was a member of Manson's band for less than a year in 2008, discussed the shock rocker just a day after Manson was accused by several women of abuse and assault.

On Monday (February 1), "Westworld" actress Evan Rachel Wood claimed that Manson "groomed" and "horrifically" abused her for years. After she shared her accusations, at least four other women posted their own allegations against the singer. The women claimed to have endured "sexual assault, psychological abuse, and/or various forms of coercion, violence, and intimidation" at the hands of Manson.

During an appearance on the Twitch channel Space Zebra on Tuesday (February 2), Borland said: "Marilyn Manson… I was in the band for nine months. He's not a great guy. And every single thing that people have said about him is fucking true. So relax about the allegations towards the women… Like when people [say bad things about] these women that are coming after him right now… Fuck off. They are speaking the truth. And I'm sorry to everyone on this podcast right now who doesn't like this, but that guy — he's amazingly talented, but he's fucked up and he needs to be put in check and he needs to get sober and he needs to come to terms with his demons. He is a bad fucking guy."

"Sorry to take this to a dark place, but that guy is canceled. Goodbye. Don't let the door hit you on the way out."

Several hours after Wood went public with her allegations, Manson's most recent record label, Loma Vista Recordings, issued a statement discontinuing its relationship with the singer.

"In light of today's disturbing allegations by Evan Rachel Wood and other women naming Marilyn Manson as their abuser, Loma Vista will cease to further promote his current album, effective immediately," the label said. "Due to these concerning developments, we have also decided not to work with Marilyn Manson on any future projects."

On Monday, Manson issued a statement denying the abuse allegations leveled against him, writing on Instagram: "Obviously, my art and my life have long been magnets for controversy, but these recent claims about me are horrible distortions of reality. My intimate relationships have always been entirely consensual with like-minded partners. Regardless of how — and why — others are now choosing to misrepresent the past, that is the truth."

In 2018, Wood testified in front of a House subcommittee in an effort to get the Sexual Assault Survivors Bill of Rights passed in all 50 states.