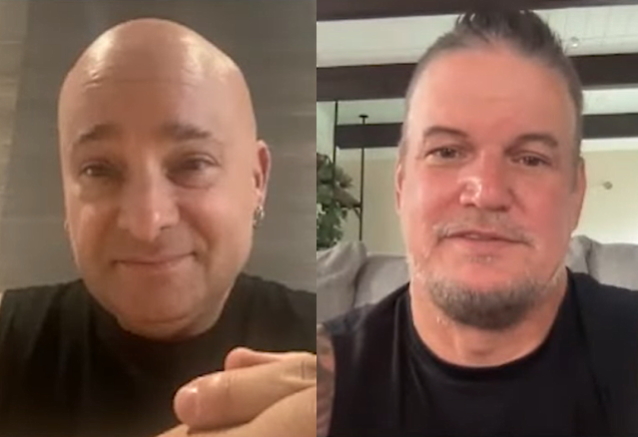 What Did DISTURBED's DAVID DRAIMAN And DAN DONEGAN Learn About Themselves During Pandemic Lockdown?

DISTURBED's David Draiman and Dan Donegan were recently asked by Carlota of Audacy Check In what they learned about themselves while sitting at home during the two-year coronavirus pandemic. Draiman, who has an eight-year-old son, said (as transcribed by BLABBERMOUTH.NET): "I learned to have greater appreciation for the teachers of America than I ever had before in my life, and to know that I do not have the patience [laughs], nor do I have the discipline to be able to be a teacher in my own right to my kid. And I'm very glad that there is such a thing as school [laughs] now that it's back in session.

"Home schooling was tough," the singer continued. "It's one thing to be able to passively teach someone, and then it's another thing when it's your own child and you're so vested and they're so much a part of you. It's hard to separate the emotion from the raw figures and numbers and words. It taxed everybody, I think; that was one way.

"I think the pandemic and these past couple of crazy years have taught me to appreciate our ability to somewhat at least get back to a quote-unquote normal life," David added. "When everything that you're used to gets suddenly taken away from you and you don't have a say in the matter and you have no choice, it's quite the emotional bomb that gets set off. I'm sure it messed with a lot of people. I know it messed with me too."

Donegan, who frequently shares posts on his personal Facebook page that amplify Republican talking points and that are derogatory to Democrats, said: "I think I learned that everybody on social media is an expert and a doctor. I mean, they're the judge, jury and executioner of everything in the world. Sometimes it's comical and sometimes it's frustrating. Unfortunately, even good friends, when you're at odds — [there's] a lot of opinions flying around out there, [and] you start to pick a few that you maybe don't like as much. You've gotta put that to the side or try your best not to get too involved in that.

"Other than that, I discovered how much I missed playing on the stage during this whole pandemic break," the guitarist continued. "It was lonely being home and having this taken away from us for a couple of years like that. Like many people — obviously, the whole planet — just to be thrust into this pandemic and into this world of having your life basically stripped away from you for a bit, I wasn't ready for that. We all thought it was gonna be a two-week flatten-the-curve thing and then it turned into a couple of years. For me personally, it was hard to be away from everybody, because me and the rest of the band guys, we all live in different states, so it took a while before we'd even seen each other again. These guys are family to me. It was hard to be away from everybody that you're used to being surrounded by all the time. But we're getting it back. The machine is running again."

DISTURBED performed "Hey You", the first single off the band's upcoming studio album, live for the first time on July 14 at the Rock Fest in Cadott, Wisconsin.

The official music video for "Hey You", which was released that same day, was directed by Josiahx. Draiman described the track as "a wake-up call. We've become our own worst enemies," he said. "Civil discourse has become the exception instead of the norm. People have lost themselves in outrage addiction."

Last month, Draiman said that DISTURBED's upcoming album, which is tentatively due in November, will contain a "surprise track" that will "blow [fans'] minds."

In May, Draiman told the audience at DISTURBED's concert in Camden, New Jersey that the band's new LP was "about 90 percent heavy as fuck. Now there's still 10 percent of caring, loving goodness [laughs] — 10 percent. Hey, for everybody that fell in love with 'The Sound Of Silence' [SIMON & GARFUNKEL] cover, I figured, you know… But the rest of it? 'Sickness'-, 'Ten Thousand Fists'-era DISTURBED, for sure. You excited about that? 'Cause I'll tell you we're really fucking excited about it."