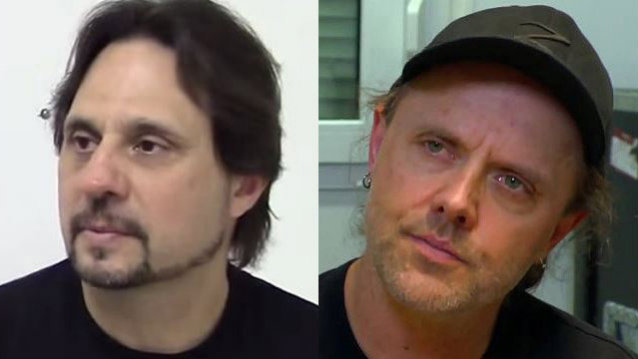 Former SLAYER drummer Dave Lombardo says that METALLICA's Lars Urich is "a good drummer" whose songwriting input is integral to the chemistry that has catapulted METALLICA to superstar status since the band's inception more than 30 years ago.

During a November 22 clinic at Cueva Rock in Quartucciu, Sardinia, Italy, Lombardo — one of thrash metal's premier sticksmen who famously filled in for Ulrich during METALLICA's performance at Download festival in England in June 2004 — was asked what he thinks of the members of METALLICA on a personal level.

"I love the band," he responded. "They're great guys. James [Hetfield], Lars and Kirk [Hammett] and Robert [Trujillo]… very nice people. I had a really good experience. I've had many great times… very crazy stories… but I can't talk about those."

Pressed to comment on the fact that Ulrich's drumming skills are constantly questioned, Lombardo replied: "I think Lars is a good drummer. He's a good arranger. He arranges… Without Lars, there wouldn't be a METALLICA. So you have to give him credit for what he does for the band."

Lombardo continued: "It's very important... When you have a chemistry within a band. There's four members of the band. When there's chemistry, like a special interaction between musicians, if you take one musician out, it's not the same. If you take Lars out of the equation, it won't be the same."

While speaking with UK's Rhythm magazine back in 2009, Lombardo was a bit more critical of Lars' drumming abilities, saying that playing with METALLICA at Download in 2004 was a great experience, but adding that it was good to "show 'em how it's done!" Dave continued. "No disrespect to Lars, because Lars is great and he's a very nice guy, but he needs to spend a week at my house and we need to sit down and play. I could show him — 'No, Lars, like this!'… 'Let's chill, let's relax, have some coffee and let's play!' [Laughs]"

A few months later, Lombardo was asked by Noisecreep if Ulrich had ever accepted his offer of drum lessons. "Oh man, no, he hasn't," Lombardo said laughing. "Yeah, but that was all done as a joke. It's just me having fun."

Lombardo added: "Of course someone ask[ed] me about Download festival. It's like, 'Yeah, show him how it's done.' [But] I don't need to show him, he's amazing, but there's always that kind of rivalry, that fun rivalry."

Ulrich blamed his non-appearance at the 2004 Download on exhaustion, caused by an unrelenting tour schedule and the break-up of his seven-year marriage to Skylar Satenstein. He said in 2005 interview: "It was the first-ever METALLICA gig I'd ever missed."

He continued: "You wanna try laying in a hospital in Germany while Dave Lombardo — the greatest drummer on the planet — is playing with your band. That's not easy."