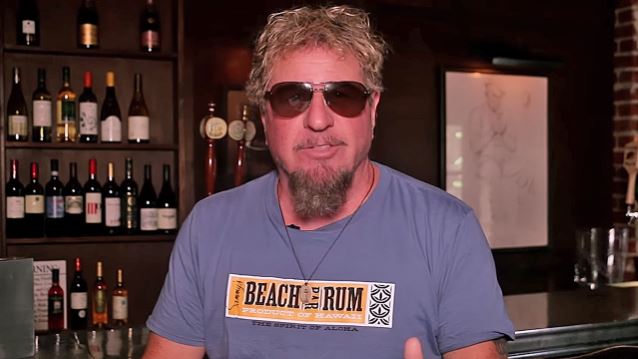 What Would It Take For SAMMY HAGAR To Reunite With VAN HALEN? Not Money, He Says

During a brand new interview with Billboard, Sammy Hagar was asked if there is any chance of him reuniting with VAN HALEN, more than a year after he sent a tweet to Eddie Van Halen wishing him a happy birthday — and getting a cordial response.

"Let's put it like this — when it came to my birthday, I didn't get a message," Hagar noted, "so obviously that camp, him and Al [drummer Alex Van Halen], still have some kind of trip against me. I'm certainly not looking to get back in that band when I've got CHICKENFOOT sitting in my lap and I'm scared to grab the reigns of that one. VAN HALEN would be twice the nightmare of the workload and the anxieties about getting along or being worried about being stabbed in the back again or something. I don't want to put myself in that situation, that's for sure."

One idea that Hagar threw out as a possibility was going on tour with the original VAN HALEN, including singer David Lee Roth and Michael Anthony back on bass, with the two singers performing the songs they recorded with the group. "That's really the only way I would be interested in a VAN HALEN reunion," Hagar said.

"Everybody's saying, 'Well, what would it take?'" Hagar added. "For me, no money, man. I don't need money. I would do that for the fans and give the money to food banks or something. I'm not sure anybody else would agree with me, but that would interest me enough to sit down across the table from everybody and work that one out."

Hagar told The Pulse Of Radio a while ago that his problems with Eddie began as far back as the sessions for VAN HALEN's 1995 effort "Balance", Hagar's last album with the group. "Eddie needs somebody to make decisions and a leader, y'know?" he said. "He's not a natural born leader kind of guy. And his brother was always the leader before — or Roth was the leader before — and when Roth left, his brother and him bumped heads so much, when I walked in it was like, 'Well, what does Sam wanna do?' y'know? So it became kind of like, yeah, I was making all the decisions, so then on 'Balance', all of a sudden, he didn't like my decisions and it was like really weird."

Hagar blasted his former bandmates in a 2015 interview, saying there was "no chemistry" between the members of the group's current lineup, including original singer David Lee Roth. He said at the time: "They don't like each other. I mean, it's obvious. It's like a backup band with a guy out there in front. I bet they don't say five words to each other offstage."