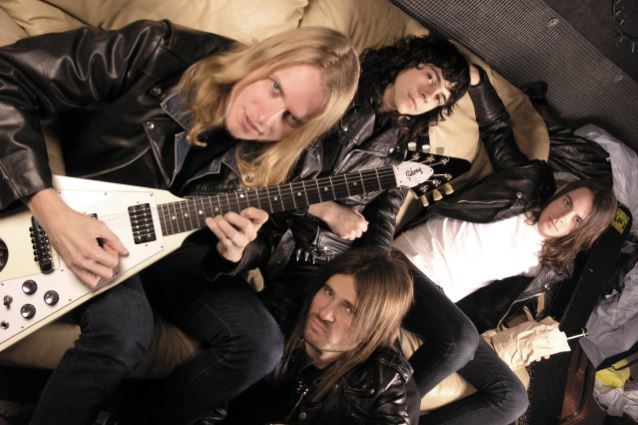 WHITE WIZZARD's James J LaRue-directed video for the song "Break Out" can be seen below. The track is described in a press release as "fast and furious, etched with the signature WHITE WIZZARD sound."

Founding member Jon Leon comments: "Having James J LaRue laying down leads for our new single, 'Break Out', is just fantastic. He is a superb player and I am very excited to have him back in the band as a permanent member. He was there at the beginning when I started this, and it's only fitting he returns to see the band into the future."

He continues: "The song is about staying true to yourself and questioning the establishment — be that religion, the government or anything else which constrains the human spirit. Of course, in typical WHITE WIZZARD tradition, our video is a very tongue-in-cheek take on that message and we had a real blast making it!

"We are further excited to be joining up with James Luna and Tyler Meahl to play Frost And Fire festival in Ventura. We'd been talking about doing something together for some time now. However, existing commitments had made it impossible, so it's great that we can finally get together in October. We will perform the original 'High Speed GTO' EP along with some other songs from that era, and maybe a couple of covers, and depending on how everything goes, we may look at doing more stuff together.

"WHITE WIZZARD is an evolving entity of myself and James J LaRue that will keep making music, while staying open to all possibilities and we are excited for the future, whatever that may hold."

James J LaRue adds: "I'm totally excited for the release of this new song and video. Jon was tireless getting the sounds he wanted, and I lost a lot of sleep animating and putting this video together. While I waited on video file renders, I was practising along with the original EP, getting a head start on having these songs PERFECT for everyone at Frost And Fire'. A lot of my friends are playing that show. It's a very classic lineup all around. See you all in October!"