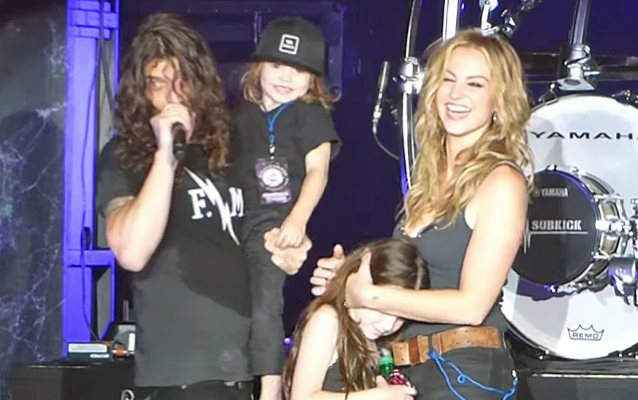 WHITESNAKE bassist Michael Devin proposed to his girlfriend, actress Drea de Matteo ("The Sopranos", "Sons Of Anarchy"),during the band's July 25 concert at the Trump Taj Mahal Casino in Atlantic City, New Jersey. Video footage of the proposal can be seen below.

Devin recently told Heavy Metal Hill about how he landed the gig with WHITESNAKE: "I became a member of WHITESNAKE in 2010 while I was on tour with LYNCH MOB. Brian Tichy was the drummer and my good friend. He had already secured his position with WHITESNAKE and they were already talking to another bass player — a friend of ours. And it looked very promising for this bass player and I just assumed that he was going to be the guy. I was also working toward going out with Jason Bonham in the LED ZEPPELIN EXPERIENCE. I had two jobs going on, I was pretty happy with that, I never even imagined my name would be put in the hat with WHITESNAKE. Long story short, [WHITESNAKE singer] David Coverdale decided to keep looking for bass players and Brian had mentioned he was out and about with LYNCH MOB and David asked him who was on bass. Brian mentioned me, so I sent some video of me playing live and then one thing led to another and I found myself up in Tahoe auditioning for David live. Then he called me while I was in Seattle and asked if I wanted to join the band. That was a great day… I had three jobs, WHITESNAKE, LYNCH MOB and the LED ZEPPELIN EXPERIENCE with Jason [Bonham]."

Devin also talked about his interest in becoming a vocalist in his own right. He said: "I started singing late in life. I always new I had a tone and I could recognize my own vocal tone and I knew it was cool for rock and roll but I had chronic shyness, so it took me a long time to get to a place where I could go out in public and sing. I owe it mostly to David Coverdale — he really helped me and encouraged me to sing. Doug Aldrich and Brian Tichy and I had a band called STEAMROLLER, which was the first time I went out as a singing bass player… and that was trial by fire. You know, it's not like I'm playing with two guys from my hometown in some shitty little bar, I was with two class acts where there was bound to be a crowd and I had no idea about my voice. I had no idea how high I could go or how low I could go, I just knew I wanted to use it. Some shows were better than others, and it was all about finding my footing. You don't just show up and sound like Freddie Mercury, so that's all I've been doing — is just singing as often as I can. I also have an EP coming out this year where I do the singing."