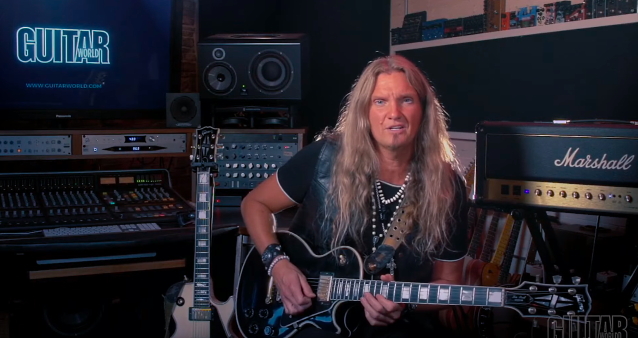 WHITESNAKE's Joel Hoekstra stopped by Guitar World to give an exclusive lesson of "Trouble Is Your Middle Name", one of the singles from the band's latest album, "Flesh & Blood". Check it out below.

"Flesh & Blood" was released in May 2019 via Frontiers Music Srl. The disc follows the 2011 critically acclaimed studio album "Forevermore" and 2015's "The Purple Album", a reimagining of DEEP PURPLE classics from singer David Coverdale's time in that band.

Coverdale stated about the lyrical inspiration for "Trouble Is Your Middle Name": "We've all had [relationships] where the relationship's been really challenging, but you haven't been able to resist going for it. It's just too magnetic — the pull of the black hole. I don't mean that to be sexual [in nature]… But that irresistible… You're going, 'My God. I shouldn't be doing this.' It's like 'Love Ain't No Stranger', really — that kind of theme. 'I shouldn't be doing this, but damn it, it's too good to resist.' And 'trouble' is definitely this chick's middle name."

Since joining WHITESNAKE five years ago, and just in time for "The Purple Album", Chicago native Joel Hoekstra has really come into his own, not only as a highly impressive axe-slinger, but also as a very accomplished songwriter too, co-writing six of the songs for "Flesh & Blood" with singer David Coverdale. Of course, Joel's talents are hardly surprising, considering he's the son of two classical musicians.