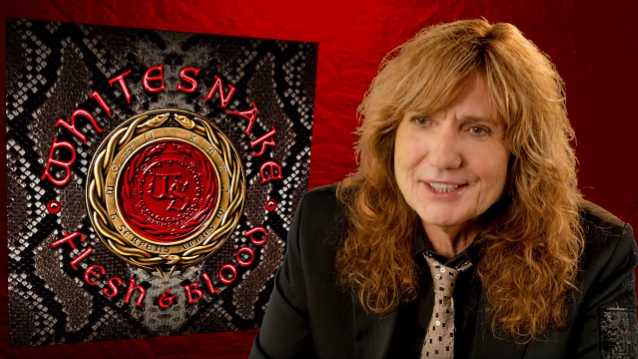 A two-minute video in which WHITESNAKE mastermind David Coverdale discusses the band's new single, "Shut Up & Kiss Me", can be seen below. The song will appear on the group's upcoming studio album, "Flesh & Blood", which will be released on May 10 via Frontiers Music Srl.

"Flesh & Blood" follows the 2011 critically acclaimed studio album "Forevermore" and 2015's "The Purple Album", a reimagining of DEEP PURPLE classics from Coverdale's time in that band. The 13 original, visceral tracks on "Flesh & Blood", the band's 13th studio album, are, luckily for you dear reader, "all killer, no filler", as the saying goes.

Coverdale, the mastermind behind WHITESNAKE and co-composer of "Shut Up & Kiss Me" with guitarist Reb Beach, said "that after the intense darkness of our last video, 'Burn', if anything, it's 'light' snake, you know? We've got some really dark energy going on in the world right now, so we're gonna write and record a fun knees-up song about falling in love with a fabulous babe. You're over-talking, over-compensating and she just looks at you, takes the reins and says 'shut up and kiss me!' and that's it!! My video director and creative partner Tyler Bourns and I discussed a great storyline for the video, which involves a surprise guest: my fabulous old white Jaguar. We ended up cleaning and detailing it, as it has been in storage since I moved to Lake Tahoe, then we dusted off my old turquoise silk jacket from the original 'Here I Go Again' video and I was thinking, 'Man, this is going to be fun!' It's a respectful acknowledgment and positive nod to the past, just fun stuff."

Since joining the band four years ago, and just in time for 2015's "The Purple Album", Chicago native Joel Hoekstra has really come into his own, not only as a highly impressive axe-slinger, but also as a very accomplished songwriter too, co-writing six of the songs for "Flesh & Blood" with singer David Coverdale. Of course, Joel's talents are hardly surprising, considering he's the son of two classical musicians.

WHITESNAKE has already announced its first shows of the 2019 "Flesh & Blood" world tour, which will feature songs from the new studio record alongside its biggest hits and songs from one of the greatest back catalogues in rock 'n' roll history, spanning over 40 years.