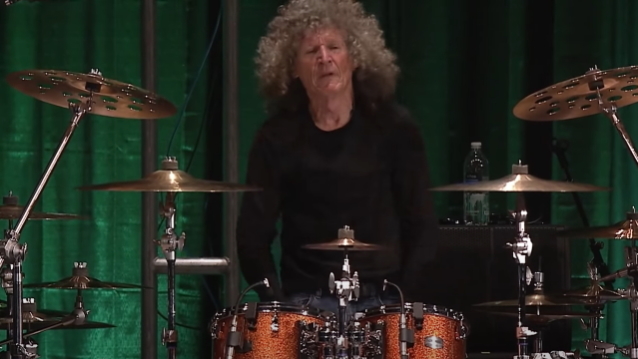 **Update**: Earlier today, the Twitter account @tadrums, which appears to be controlled by Tommy Aldridge, responded to a repost of the Rock Imperium statement claiming that the WHITESNAKE drummer's "severe health problems" caused the cancelation of the band's appearance at the event.

"This is patently untrue", the message from @tadrums, which does not have a blue check that the social media platform gives to celebrities, public figures and journalists to verify their identities, read. "I don't know how it ever saw the light of day."

A separate statement posted earlier today on WHITESNAKE's official web site and shared by David Coverdale on Twitter makes no mention of Aldridge's health. It reads as follows: "Dear WHITESNAKE Fans, Please know we are doing everything in our power to bring you the best high energy and exciting shows we possibly can. We always strive to deliver 100%, as WHITESNAKE fans always deserve that much, and never anything less.

"Our desire is to complete our European tour with the same passion in which we started it!

"We knew embarking on this tour could present many new obstacles and potential issues, which had been unknown to us on previous tours. Please know we are doing everything in our power to work through these unprecedented challenges. We are a close-knit band, we love each other, and we love you. We appreciate you, and as always we thank you for your support!

"We sincerely apologize to our Spanish fans for unavoidably having to cancel tonight's show."

WHITESNAKE was forced to cancel its performance tonight (Saturday, June 25) at the Rock Imperium festival in Cartagena, Spain due to "severe health problems" suffered by drummer Tommy Aldridge.

Earlier today, the Rock Imperium organizers issued the following statement via social media: "Just when we had all the backline and stage preparations from WHITESNAKE ready for their show today, their booking agent informed us of the sad news that Tommy Aldridge is having severe health problems today, so we regret to announce the cancellation of their show at Rock Imperium Festival. We are really sorry for any inconveniences caused, we are devastated and can only wish Tommy a quick recovery.

"In order to try to make up for this hurdle our friends in EUROPE will play a full set as headliners and we have adapted the running order.

"Thank you all for your understanding."

Tommy is not the only member of WHITESNAKE to fall ill during the band's ongoing European tour. Earlier in the month, guitarist Reb Beach missed several shows after apparently contracting a mystery illness. After the Prague concert on June 14, fellow WHITESNAKE guitarist Joel Hoekstra addressed Reb's absence in a tweet, writing: "Reb Beach was under the weather and I had to cover his solos."

Aldridge is on his third stint playing drums with WHITESNAKE. Before, during and in between his time with the David Coverdale-fronted outfit, Aldridge has also performed and recorded with OZZY OSBOURNE, BLACK OAK ARKANSAS, THIN LIZZY and Ted Nugent, among other artists.

For more than four decades, Aldridge's fiery drumming has defined hard-rock showmanship. He's renowned for his virtuosity, groove, and for innovating such techniques as the use of double-kick drums and playing with his bare hands. Being a fan of jazz, Tommy used Louis Bellson's double-bass drum setup and pioneered its use in rock. That loud, driving double kick style led to recordings with BLACK OAK ARKANSAS for nearly five years before working with the PAT TRAVERS BAND and then Ozzy Osbourne, which really opened the doors for Tommy.

The 71-year-old Aldridge joined Osbourne's solo band in 1981 prior to the North American leg of the "Blizzard Of Ozz" tour. While he is credited in and pictured on the "Diary Of A Madman" album released that same year, he did not actually perform on the record. He did, however, play on Ozzy's 1983 album, "Bark At The Moon", as well as the live releases "Speak Of The Devil" and "Tribute".

Aldridge's latest studio release with WHITESNAKE was "Flesh & Blood", which came out in May 2019 via Frontiers Music Srl.

This is patently untrue. I don’t know how it ever saw the light of day.