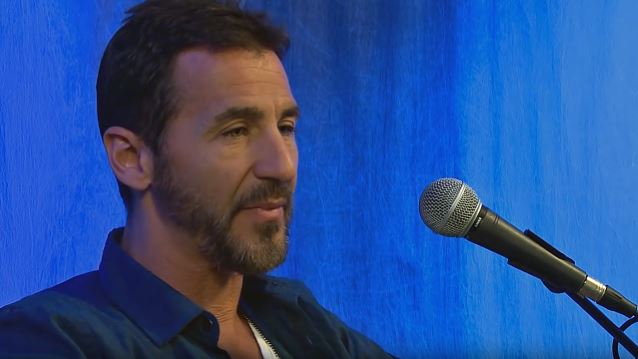 Roxy Myzal of HardDrive Radio recently conducted an interview with GODSMACK frontman Sully Erna. You can now watch the chat below. A couple of excerpts follow (transcribed by BLABBERMOUTH.NET).

On GODSMACK's plans for the coming months:

Sully: "I don't know yet. We're talking now about getting together maybe fall of next year to write and record and dropping something top fo 2018, which is gonna be the 20th-year anniversary of our first album. So we thought, you know what? We could have pushed it and did something to drop in 2017, but we were, like… You know what? They're [GODSMACK's Shannon Larkin and Tony Rombola] working on their side project [THE APOCALYPSE BLUES REVUE], and I'm working on the solo stuff. So let's just finish this and do it right and just wait a pinch longer, because if we do that and we drop in 2018, we can make a really big, great world tour with the whole theme of the first album concepts involved in it and all that. So I think that may be the plan."

On the highlights of his twenty years as a touring musician:

Sully: "Well, certainly for my musician side of me, I think it's meeting some of the people that were my childhood heroes. Being able to meet Neil Peart [RUSH] a couple of times, that was, for me… I didn't need to meet anyone else after that. As much as I love the Steven Tylers and the Joe Perrys and the James Hetfields, Neil Peart… that guy changed my life as a musician. I quit school because of RUSH… Other than that, it was, like, really, that's all I did — I studied RUSH. I sat home and strapped on headphones and played 'Moving Pictures' and 'Exit… Stage Left' and 'Signals' and all these great albums. So I think meeting some of those guys — Neil Peart, Ozzy [Osbourne], James Hetfield, Steven Tyler, Joe Perry — all those childhood heroes of mine — that was certainly great memories in the twenty years that I've been on the road. You know, being able to sing 'Heaven And Hell' with BLACK SABBATH and 'Sad But True' with METALLICA, those are big moments, when you grow up listening to bands like those and listening to those songs and then you're there at that level actually playing with them. Not that we're at their level, but when you get to tour with them and things like that, and you're on that same stage, it's pretty cool. I just recently got to hang with Dave Grohl [FOO FIGHTERS] and sing 'School's Out' by Alice Cooper at Fenway Park in Boston, so that was a pretty big deal for me too. And what a great bunch of guys those guys are. So, yeah, if I would have to look at highlights of my last twenty years, I would definitely single those moments out more than the parties and the girls and that kind of thing. Who hasn't told that story? And who cares anymore?"

Sully's new solo album, "Hometown Life", was released on September 30 via BMG. The effort offers a wide-ranging glimpse of Erna's eclectic musical tastes — from the singer-songwriter Billy Joel/Bruce Springsteen narratives of the title track and the bossa nova touch of "Take All of Me" to the breezy island feel of "Your Own Drum", the finger-snapping Motown bass lines of the bluesy "Turn It Up", the country flavors of "Different Kind Of Tears" and the wide-screen canvas of mini-symphonies "Blue Skies" and "Forever My Infinity".