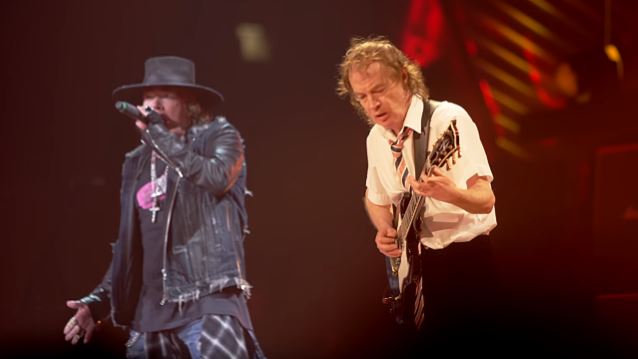 AC/DC guitarist Angus Young is rumored to be making a guest appearance with GUNS N' ROSES at their shows in Sydney, Australia Friday and Saturday night.

GUNS N' ROSES bassist Duff McKagan tweeted earlier today that Angus greeted him and his bandmates when they arrived in Sydney. In addition, Fernando Lebeis, who is part of GN'R's management team, posted a photo on Instragam of a nice flower arrangement with a "Welcome to Sydney!" card signed by Angus and the guitarist's wife Ellen. "I have missed these two, Angus and Ella. AC/DC Family," Lebeis wrote.

Further fueling the speculation of a Young-GUNS N' ROSES jam is the revelation that fans who attended GUNS N' ROSES' Brisbane show earlier this week told the Australian GN'R fan page Guns Over Oz that the band played some AC/DC songs during its Brisbane soundcheck.

GUNS N' ROSES frontman Axl Rose replaced Brian Johnson last year for U.S. and European AC/DC dates after the longtime AC/DC singer was ordered off the road by doctors due to hearing issues.

The Australian leg of GUNS N' ROSES' "Not In This Lifetime" tour kicked off in Brisbane, and continues in Sydney on Friday and Saturday, before heading to Melbourne, Adelaide and Perth.

Told we had to stay on plane last night in Sydney; 'airport security' wanted to do a check. We waited. It was Angus Young is an orange vest!

I have missed these two, Angus and Ella. AC⚡️DC Family.