After John 5 posted an Instagram photo of a new t-shirt that will be available on sale when his band hits the road later this week, Nikki chimed in with a comment using his official "nikkisixxpixx" account. "Better bring some snow boots," he wrote. "Gonna be a great tour. I'm excited to play bass on this."

JOHN 5 AND THE CREATURES' tour is scheduled to kick off on October 31 in Harrison, Ohio and run for nearly three weeks, ending on November 17 at the Designer Con, the annual art and design convention.

Sixx previously joined JOHN 5 AND THE CREATURES on stage this past April at the Whisky A Go Go in West Hollywood, California to perform a cover of the MÖTLEY CRÜE classic "Shout At The Devil".

Nikki's other band, SIXX:A.M., has been hiatus since early 2017, and the bassist said last year that he was done with touring, choosing instead to focus on his family life.

"For those of you asking, I've been playing in bands and touring the world for 40 years. I have no immediate tour plans unless I get a wild hair up my ass or something or somebody really inspirational comes along," he said at the time. "Since I've been home I've just been writing music non-stop, recording with other artists, taking vocal, bass and guitar lessons and focusing on photography. Money has never been and isn't a driving force for me... Let the chips fall where they fall...So I guess I'm unofficially retired or maybe just expired at this time. Nice to give 100 percent of my time to my wife and kids."

JOHN 5 AND THE CREATURES tour dates:

MÖTLEY CRÜE recently recorded four new songs for the film adaptation of the group's biography, "The Dirt - Confessions Of The World's Most Notorious Rock Band".

JOHN 5 AND THE CREATURES released a live album called "It's Alive" in January via 60 Cycle Hum Records. 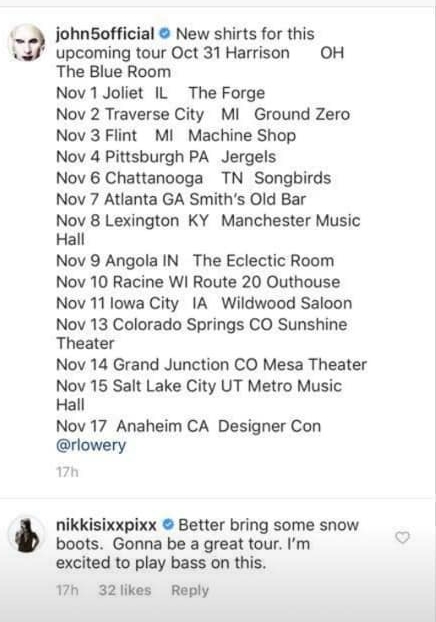