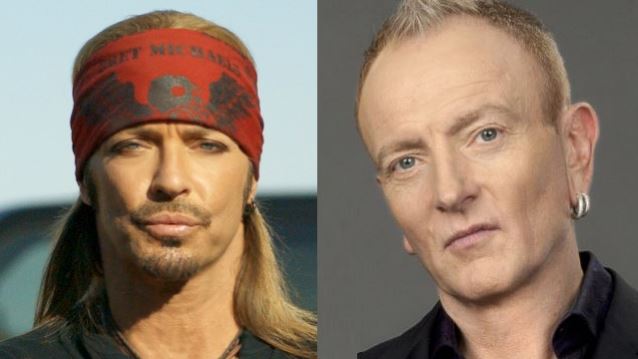 POISON frontman Bret Michaels has once again claimed his band will tour with DEF LEPPARD in 2017.

Bret broached the subject during his September 1 solo concert at the Hampton Beach Casino Ballroom in Hampton Beach, New Hampshire. As he was performing the encore song "Nothin' But A Good Time", he asked the crowd if they were excited by POISON reuniting in 2017 for an arena tour with DEF LEPPARD.

Bret originally mentioned the tour in a July interview with The Salt Lake Tribune.

One person who appears to know nothing about a POISON/DEF LEPPARD tour in 2017 is LEPPARD guitarist Phil Collen, who told the 106.9 The Eagle radio station last month: "Yes, there's some dates coming in [for next year]. POISON? You know, I think that was made up — I think it was Bret Michaels's wishful thinking. [That was] first I've heard of it. I actually heard that as well, and it's, like, 'No!' But, yeah, we are gonna be touring, but we haven't got anything set in stone yet at all."

DEF LEPPARD is continuing to tour in support of its latest, self-titled album, which came out last year.