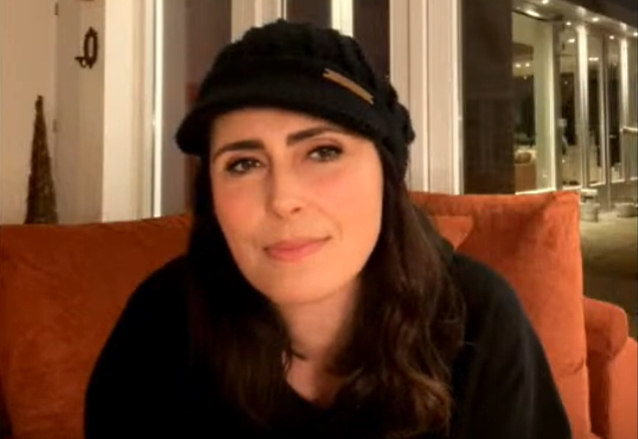 WITHIN TEMPTATION's Sharon Den Adel spoke to Brazil's Wikimetal about the band's plans to release more new music as a follow-up to the songs "The Purge" and "Entertain You", both of which came out last year.

"'The Purge' has just been released, and we're just looking for the right time for maybe releasing another single or something else to do," she said (see video below). "We're working on that now. It's still a bit undecided on dates and everything. So I can't tell you when the next thing is coming up, but we're working on it. So that's good news."

According to Sharon, she and the rest of WITHIN TEMPTATION have been trying to use the coronavirus downtime to stay creative. "We had just released, of course, the 'Resist' album only in 2019, so that's not that long ago," she said. "For us, normally, we take a few years between albums, but this time we had already the plan to release every time a single that we wanted to write in the moment and feel, like, okay, this is a song that matters now or that inspires us — the topic, and also the sounds that we like at the moment. And that's really working for us. So there's not a complete album yet. We're writing while we speak. Like, today we have been working again on new stuff. So now we go along without an album planned yet, or recorded."

Asked if she has had a chance to get together with the rest of WITHIN TEMPTATION in person to work on new music, Sharon said: "We had some moments during this whole pandemic that we were able to travel a little bit. And so we went to Sweden to record some stuff. And our producer also came here to be with us. So we could continue working. That's how 'The Purge' came together — it was written during the pandemic, where 'Entertain You' was actually written just before everything started. We were even able to do a video. But it was very strange because I hadn't seen the guys for such a long time — everybody did the recordings at home or in the studio with no one else around, because we were not allowed there, of course; we could only work one-on-one and with a lot of distance. So we didn't really actually work together in one room while writing stuff or recording stuff. And then the video was the same. And I was helping also with the styling, together with the artist I work with, the stylist — together we did styling for the band. So we had bandmembers coming in separately. It was strange. I got to see everyone, but they didn't get to see each other. So that was a bit strange."

In December, WITHIN TEMPTATION released the official music video for "The Purge". "Entertain You" kicked off of a series of digital single releases and exceeded all expectations. "Entertain You" was No. 1 most added on the Billboard Mainstream Rock Indicator chart, with airplay on at least 40 radio stations, including Music Choice, SiriusXM Octane, WZOR and KQXR, No. 5 in the Contraband Metal chart, and at No. 18 in the Billboard Mainstream Rock Indicator chart in USA.

WITHIN TEMPTATION released the official music video for "Entertain You" last May. The song was a surprisingly quick follow-up to WITHIN TEMPTATION's seventh studio album, "Resist", which came out in February 2019.

"Entertain You" arrived one week after the last show of the "Worlds Collide" tour was supposed to happen. The co-headline trek with American rock band EVANESCENCE was originally planned for April 2020, but due to the COVID-19 pandemic, it has now been postponed to September 2021. The trek, for which an impressive 150,000 tickets were sold in eight countries, is slated to take place across venues such as the O2 Arena in London, AccorHotels Arena in Paris, Velodrom in Berlin, and Palais 12 in Brussels.