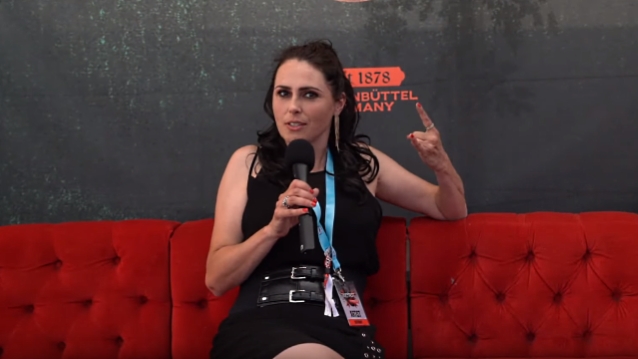 WITHIN TEMPTATION To Begin Work On New Music In The Fall

Dutch heavy rockers WITHIN TEMPTATION are planning to work on new music this fall.

Frontwoman Sharon Den Adel spoke about the band's future activities during an interview with Kaaos TV at last weekend's Rockfest in Hyvinkää, Finland. She said (see video below): "We're gonna be touring maybe next year again. But after the summer [of playing shows], which will end for us in September — we will start to write again. Because we want to maintain that, because we are on a new path and we still have to develop ourselves in direction more than we are doing already.

"I love touring, but I've been on tour already now almost for a year again. And so it's, for me, very important to be in the studio back and to work on new ideas," she continued. "And — I don't know — I just wanna make music also. I wanna combine it better than being on tour for four years again and then start a new album; I wanna start now already."

According to Sharon, WITHIN TEMPTATION is exploring various options on how to release its new music, including putting out several singles prior to completing a full-length album.

"The people are not really waiting for an album anymore — people are actually waiting for a new song," she told Kaaos TV. "So we want to give people maybe sooner some songs already — new songs — and then eventually release an album… Do it more like DJs — they come up with new songs here and there sooner, and then they drop an album later on. But you still have, of course, the way you have to do your promotion — you still have to have the promotional moment to build something up for. So, we're still figuring out how to do that."

Asked if WITHIN TEMPTATION would consider releasing an EP instead of a full-length disc, Sharon said: "No, because EPs don't get the attention of journalists or anything. It's too small — people don't pay attention enough to it, and you give away a lot of new songs, which you worked very hard [on]. So you want to combine it all on a new album."

WITHIN TEMPTATION's latest album, "Resist", came out this past February. It marked the band's first release since 2014's "Hydra".