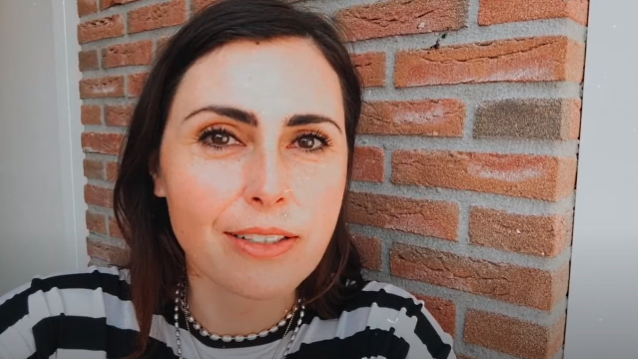 WITHIN TEMPTATION's SHARON DEN ADEL On Future Of Touring: 'There's No Going Forward' If There's No COVID-19 Vaccine Or Medicine

WITHIN TEMPTATION singer Sharon Den Adel spoke to Sonic Perspectives collaborator Rodrigo Altaf about how she is dealing with the coronavirus crisis and what the touring circuit might look like post-pandemic. Asked how she thinks the concert industry will change going forward, she said: "Well, there's no going forward if there's no vaccine or medicine. If that's there, then we can go back to [playing shows]. I think festivals will be fine eventually, because they say it doesn't spread outside as much, so outdoors events will happen and indoor events, you need the vaccine or medication. So I don't think anything will happen until that happens. And I don't see anything really changing, like playing for just a hundred people. The venues that we are playing, they are huge, so you can't go back to a hundred people. That doesn't make sense."

When the interviewer pointed out to Den Adel that many artists have taken to creating stripped-down quarantine videos while they are unable to perform in front of a crowd, she responded: "I must say, personally, I'm pretty bored with playing acoustic again and again and again. It's nice, but I like those roaring guitars and I wanna have the real thing and I wanna have the audience and I wanna have the energetic interaction. And that's what I miss. Of course, it's nice and it has been helpful for everyone to have these kinds of shows, I guess."

WITHIN TEMPTATION's European tour with EVANESCENCE, which was originally due to kick off this past April 4, will now move to September 2021. The "Worlds Collide" trek was initially postponed until September of this year in the hopes that conditions would permit the artists to perform for their fans. As the world continues to battle the virus, it has become clear that it must be delayed until next year. Specific information for the rescheduled shows will be available on the bands' web sites and at WorldsCollideTour.net. All existing tickets and VIP packages will remain valid for the rescheduled dates. Those unable to attend should visit their point of purchase for refunds.