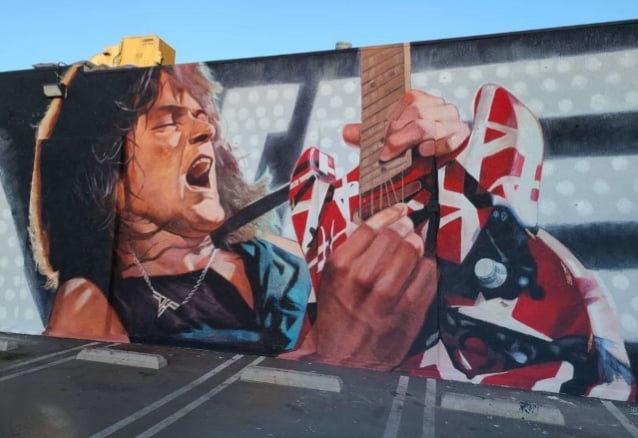 On Tuesday (January 26),Guitar Center, the world's largest musical instrument retailer, unveiled an Eddie Van Halen mural on the outside wall of its flagship Hollywood, California store located on the famous Sunset Strip.

While majority of the feedback from VAN HALEN fans has been extremely positive, a couple of fans have opined that the mural of Eddie playing his iconic "Frankenstrat" guitar is not a realistic depiction of the influential axeman.

Vargas donated his time and talent to design and create the mural, which measures approximately 17 feet tall x 105 feet long and covers the entirety of the store's outer wall at its rear entrance.

This is not the first mural that has been created in honor of the iconic musician. Less than a month after Eddie's death, airbrush artist Paul Archer painted an Eddie Van Halen mural on the back wall of Archer Airbrushing shop in Victoria, British Columbia, Canada.

Eddie passed away in October at the age of 65. His death was announced by his son.

Homie better get some glasses, because he can't see shit. pic.twitter.com/grsoXPOnH1

The mural is incredible. Literally flawless. I can understand "not liking a particular piece of art" for whatever reason, but saying it doesn't look like him makes you look BIG dumb. It's not even a matter of taste, it's just straight up wrong. pic.twitter.com/fJsrzjYzCT

I want to extend my most heartfelt gratitude to the unfathomably talented @TheRobertVargas, and @guitarcenter for the painting of this incredible mural of my father at Guitar Center Hollywood.

What an incredible honor it is to see Pop immortalized in such a beautiful way. pic.twitter.com/BdfwevCnJC