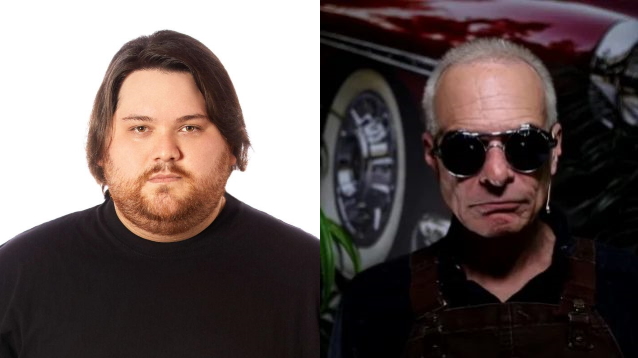 WOLFGANG VAN HALEN On DAVID LEE ROTH's Retirement: 'He'll Always Be One Of The Best'

Wolfgang Van Halen says that David Lee Roth will "always be one of the best" frontmen in rock.

This past October, the legendary VAN HALEN singer announced that he was ending his career with his upcoming Las Vegas residency during the first weeks of January. "I am throwing in the shoes. I'm retiring," Roth told the Las Vegas Review-Journal. "These are my last five shows."

Wolfgang, who joined his father Eddie Van Halen in VAN HALEN at the age of 16 for the band's 2007 reunion tour with Roth, replacing Michael Anthony, was asked about David's retirement in a new interview with Consequence. He said (as transcribed by BLABBERMOUTH.NET): "Dave is a… he's very much a one-of-a-kind [chuckles] sort of guy. We don't really talk, if ever. We were always cordial on tour together, but it's not like I've spoken to him at all in the last six years. But, I mean, he's fucking David Lee Roth. I'm so happy for him and for everything that he's accomplished. And he's just a phenomenal… He'll always be one of the best."

In November 2020, Wolfgang told Rolling Stone about his relationship with Roth: "We're cordial. But it was very business-related. You know, we were always cool, but we really only ever saw each other onstage."

A year ago, Wolfgang revealed a hilarious prank a tour manager played on Roth during VAN HALEN's final run of shows, which concluded in October 2015 at the the Hollywood Bowl. Speaking to SPIN, Wolfgang said: "Throughout the whole tour, Dave had an issue whenever someone in the audience had a beach ball. Outdoor theater, summer concert, Southern California party rock, VAN HALEN — it's not out of the ordinary. But every time he saw them, it would really upset him for some reason. And he would stop singing and then stand at the front of the stage and say, 'Throw the beach ball up here, throw the beach ball up here, throw the beach ball up here' eight times until it eventually got up, and he would stamp it out. Then he'd throw it off the stage. I guess he just really didn't want that out there.

"Before the very last show, the tour manager came up to my dad and me and whispered, 'Hey, you've got a funny little surprise for all of you guys at the end of the show,'" he continued. "We're, like, 'What?' And he goes, 'At the very end of 'Jump', when you're doing the ride out, we're going to release 50 beach balls from the top of the audience. And we'll just see what happens.' But even if he gets pissed off, what was he gonna do? It's the last fucking show. And sure enough, we get to 'Jump', and there was just a cavalcade, an avalanche of beach balls, and Dave was just, like, short-circuiting. He didn't understand how to handle it. But we all laughed it off. And it was just a really fun, almost like a fun practical joke. And yeah, that was a really fun memory of that show. As time went further and further by, the more I thought about it, like, 'Wow, if that is the last show, what an amazing way to cap it off.'"

Eddie passed away in October 2020 at the age of 65. He had been battling throat cancer and died surrounded by friends and family at a Santa Monica, California hospital.

VAN HALEN had been inactive since it completed its U.S. tour six years ago.