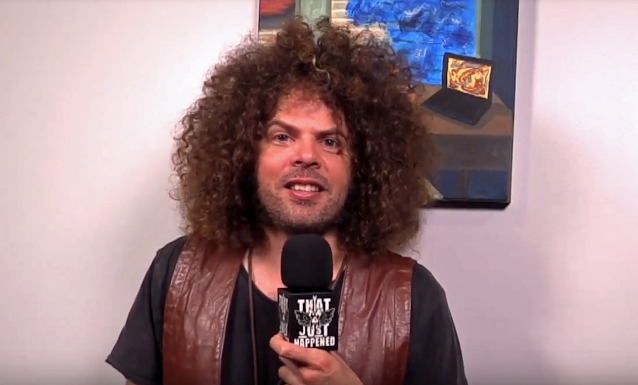 Following WOLFMOTHER's performance at the Foamhenge 2018 festival in Houston, Texas on November 4, vocalist/guitarist Andrew Stockdale spoke with Front Row Joe of That Just Happened. The full conversation can be seen below. A few excerpts follow (as transcribed by BLABBERMOUTH.NET).

Andrew: "I travel the world a lot, and when I put out a new record while I'm flying, if it makes me feel good, then I know it's a good record. If it makes me feel anxious, I'm, like, 'There's a weird vibe. There's weird mojo.' This one, I can listen to back-to-back, again and again. That's what I search for — good energy. If you ask what it's about, it's about positive energy, good vibrations, all that kind of stuff, because I think that's what they've scientifically proven what life is about — these frequencies that vibrate and make us who we are. That's what a rock show is, isn't it? You've got strings and a piece of wood, and that's what people react to — unless it's a laptop playing whatever. That's what it's about — just trying to get the good vibe... Stream of consciousness has always been my thing since the get-go, like with 'Woman' and 'Joker'. All those songs, I just make it up on the spot. 'Slipstream', I [made] it up on the spot."

On writing "Slipstream" in Australia before recording the album in Los Angeles:

Andrew: "I have a 12-year-old daughter who goes to school, so I'd drop her off at school [and] go to the studio from 10 until 3. I just made a routine of doing that every day, five days a week, for about a month. I just recorded all those songs. [I] did most of it myself for about a month... Once I had about 10 songs, I was like, 'We need to go to L.A. We need to sprinkle the magic sauce on top of this thing,' because L.A. brings out a bit of a sparkle to the records. I went into Henson [Recording Studios]... It's an inspiring place. I just wanted to hear it on the big speakers in a Hollywood studio to hear if it would cut the mustard, so to speak. We put it on the big speakers and were, like, 'Yeah, we've done a good job. This is cool.' It sounded great."

On how it felt to perform LED ZEPPELIN's "Communication Breakdown" in front of Jimmy Page during the band's 2006 induction into the UK Music Hall Of Fame:

Andrew: "You just do it. The funny thing is, we soundchecked that about five, six times, and my monitors didn't work during the actual performance. I was singing that high, and there was no monitors. I was really just trying to hit the notes the best I could. The other thing that happened that night which was pretty amazing was James Brown inducted himself into the Hall Of Fame, and we went on stage after James Brown, and he turned around and looked at us and I just bowed. Then he bowed back, and then we went on stage. It's kind of amazing for me because one of my first shows was James Brown in Brisbane, and I pretended to be a photographer. I called the [venue] and I put on this English accent and I was, like, 'Hey, sir.' I made up some name — 'Bruce Dickinsons from Rolling Stone magazine. Just got into Brisbane. Here to photograph James. I would like a photo pass. Can you please arrange that?' I was, like, 17 years old, and I put on this Cockney accent, and it worked — I was in the front row photographing James Brown."

On his future plans:

Andrew: "I've got five more songs sort of visualized. I always feel like one record leads to the next – you get those songs out of your system and you're ready for the next one. I've got the next one ready, and I also started writing a rock opera. [Laughs] It was called 'The Power Of The Denim Vest'. It was a guy who was an unemployed gamer who worked at a call center, got the sack and wanted to go to Donington festival, couldn't afford a ticket so he decided to become a roadie. It's based in England, and he went to London and roadied for WOLFMOTHER. [Laughs] Then he picked up the denim vest, put the denim vest on and then, all of a sudden, all these riffs started flowing out. Then there was some dilemma... then his girlfriend who dumped in invited him to Ibiza and wanted him to do an electronic remix with Calvin Harris, so he had an existential crisis about the power of the denim vest with this amazing riff, or if he should remix it with Calvin Harris to become commercially viable. That's as far as I've gotten with the rock musical. [Laughs]"

"Slipstream" was released on September 14. Stockdale previously described the album as "me with a guitar and a hard drive visiting different players and different studios and putting together a body of work which I found really exciting."

A music video for the album's title track, which was directed by Tyler Atkins, can be seen below.