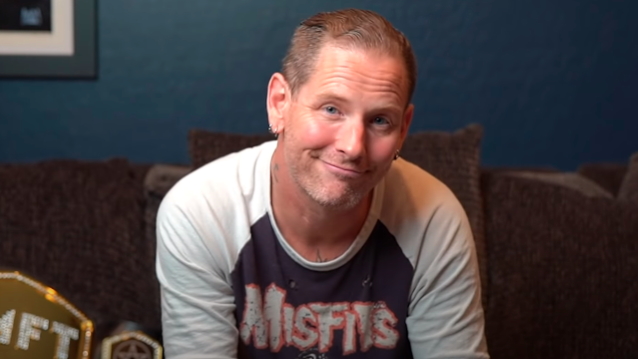 Would COREY TAYLOR Ever Get A Face Tattoo? He Responds

In a new interview with GQ magazine (see video below),SLIPKNOT and STONE SOUR frontman Corey Taylor was asked if he would ever consider getting a face tattoo. He responded "never," before adding: "I get it, you know. A face tattoo is no different than a nipple piercing from 20 years ago — 30 years ago anyway. You end up looking like a shitty notebook from high school."

While notable figures like Mike Tyson and Tekashi 6ix9ine have sported face tats in the past, recent months have seen more stars than ever tatting their cheeks and foreheads, including MÖTLEY CRÜE drummer Tommy Lee, rapper Post Malone and model Amber Rose.

Ozzy Osbourne also recently said he would "never" get a face tattoo, explaining: "Anything above the collar should be stopped. To be honest, it makes you look dirty."

A few months ago, Post Malone added a new inking of a buzzsaw dripping with blood. He also has the phrase "Always Tired" tattooed under each of his eyes.

Back in 2014, Moody's FIVE FINGER's then-bandmate Jason Hook got the word "Driven" added to his right temple.