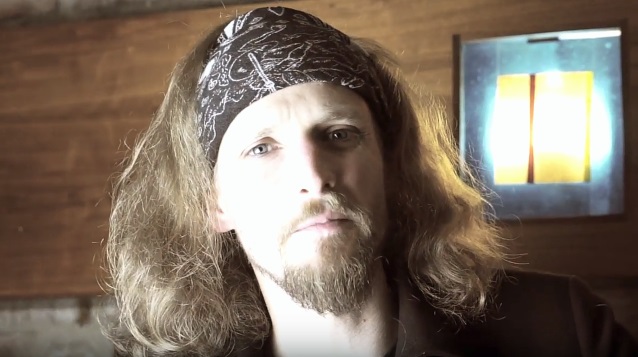 Loud TV recently conducted an interview with guitarist Philip Restemeier of German symphonic metallers XANDRIA. You can now watch the chat below. A couple of excerpts follow (transcribed by BLABBERMOUTH.NET).

On the reasons for singer Dianne Van Giersbergen's departure from XANDRIA:

Philip: "Well, I think that the reason is that we reached a point in the life of the band where all the demands that we felt — whether they came from ourselves or from outside the band, like management or maybe label or just the promoters who were asking for the possibility to play shows — and it got really, really… yeah, you can say stressful for us to manage this with the other parts of our private lives — it definitely affected all of us. Then, of course, you have always topics inside a band where not everybody is necessarily on the same page, so there was definitely some discussions where also the future of the band was a topic. And for Dianne, it came to a point where she couldn't really take that anymore. And when she said that was not going to be able to work with the band for the next six to 12 months, we had to think of something. We had to cancel, like, 22 shows in total, because it just wasn't possible to find any other solution. And we had approached Dianne with the idea of saving some of the shows with a tempory-replacement singer. We did that in the years before — when it came to Steven [Wussow, bass], when it came to Gerit [Lamm, drums] — and it was just for the best for everybody in the band. And we had really felt a need to make these shows happen. So we decided to do the shows with a temporary-replacement singer. And a day after we told Dianne that we felt that we needed to take this step, she made that statement that probably most people know now from Facebook."

On whether current XANDRIA touring singer Aeva Maurelle (AEVERIUM) will be named a permanent replacement for Dianne Van Giersbergen:

Philip: "Aeva is a temporary replacement; that was always planned as such. Some people got that wrong and already thought that she was going to be the new singer. But she has a lot of other projects going on, so we're not taking this further until the end of this year for the moment. And also for us, we're pretty busy making these shows happen, so we did not really talk about the future beyond what's… Starting in 2018, we still have to talk about that. And when we come home from this leg of the tour, that will definitely be the time to sit down and talk about the future together."

On the process of finding a new singer for XANDRIA:

Philip: "It always took us quite a while to find the right person. I mean, of course, obviously, people focus on the singers in probably most of all bands, but for us, it was the same thing when we had to look for a new bass player. It also took us quite a while, because you have to find somebody who's willing to spend a lot of time on the road and away from home, who can play well enough — of course, obviously, the musicianship and also the energy, the chemistry has to be right. And then, yeah, the people have to be able to be away from home for some time of the year, and they have to be crazy enough to really want this. So it's not easy to find all that in one person."

On XANDRIA's last search for a singer:

Philip: "Back then, we officially auditioned, and we had applications coming in from also various different countries, which is always really flattering. But, of course, then on the other hand, you have to sit down… There are still people that you have to explain to that, 'You're not done working once you get into our band,' because it's not like life is any easier then, because you're making tons of money, because you just don't, really. We all have our day jobs besides the band, and this is just something that is necessary in the music world nowadays."

The band also announced that it had recruited Maurelle to sing for XANDRIA at its European shows in November and December.

One day later, Dianne Van Giersbergen released a statement saying that she was exiting XANDRIA because "staying in the band would cause further damage to the health problems the band has caused me." She went on to say that her attempts "to put band and management issues on the table… failed and have been ignored" and her "cries for help have been met with financial threats and emotional extortion," ultimately leaving her with "uncontrollable stress symptoms."

XANDRIA made its live debut with Aeva Maurelle on November 3 at the Brainstorm festival at Gigant in Apeldoorn, The Netherlands. Fan-filmed video footage of the concert can be seen below.