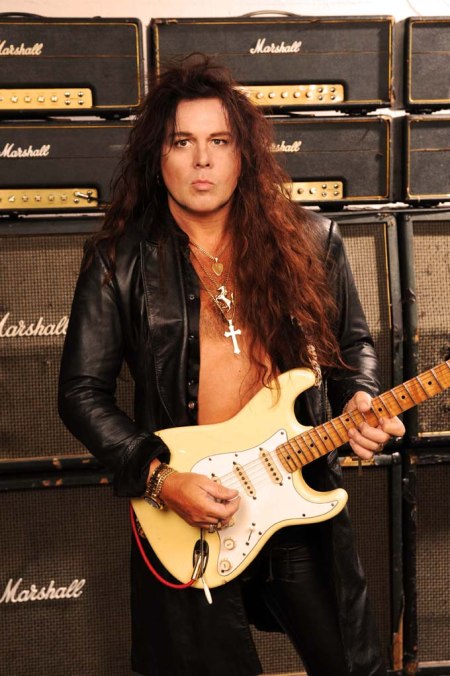 Legendary Swedish guitarist Yngwie Malmsteen recently answered several fan-submitted questions for the readers of the MusicRadar.com web site. A couple of excerpts from the chat follow below.

MusicRadar.com: You have written some great music on your own, but I'm sure many people would love to hear you collaborate with others again. Do you think you will ever do this someday?

Malmsteen: "Mmm, probably not, The way I compose is very special. If you look at somebody like Bach, he didn't need collaborators to write for keyboards, cello, violin or anything else. I feel the same way about my music. The times that I have worked with other people, I've been very unhappy with the results. I don't work with anybody on the music, of course. But my God, some of the lyrics that other people have written were so shallow: 'Hey baby this, hey baby that.' I need substance to the words, you know? Give me depth!"

MusicRadar.com: Would you ever consider forming your own super group like Joe Satriani did with CHICKENFOOT? If so, who would be on your wish list of players?

Malmsteen: "You know, I'm always open to possibilities. I've learned not to say, 'No, I'd never do that.' As far as forming my own band like what you're talking about it, I haven't thought about it. I'm too busy doing my own thing. Sure, if somebody came to me and had a good concept, yeah, I'd think about it. I don't have a 'wish list' or anything. There aren't any singers or others players I'm dreaming about."

MusicRadar.com: How does it feel to be God?

Malmsteen: [laughs] "I don't know. You'll have to ask somebody else that question. But thank you for such an incredible compliment. That's very kind of you."

MusicRadar.com: Are there any new guitar players on the scene who impress you?

Malmsteen: "I'm sure there are a lot of great players out there, but I just don't have the time to listen. It's not that I intentionally tune them out, but I literally can't find the hours in the day to check out new stuff. I do like a lot of players. B.B. King, Brian May, Eddie Van Halen, Allan Holdsworth — they're all great. Probably the last player who made a real impact on me was Ritchie Blackmore, and I was nine years old at the time."

MusicRadar.com: What's the most embarrassing thing that ever happened to you on stage?

Malmsteen: "The most embarrassing thing? Wow, that's tough… There's been so many. [laughs] No, I'm kidding. Really, the only thing that's ever been a problem on stage was when there was a mess-up with the gear or I couldn't get the sounds I was looking for. That was more frustrating than embarrassing. Personally, I'm beyond having bad nights on stage. I don't believe in them. I'm like a tennis player; in fact, I am a tennis player! To me, you have to forget all about your last point. It's on to the next one. You make a bad shot, you fuck up — so what? Hit the ball and keep going. Same with gigs. You hit a bad note - who gives a shit? Keep playing. Nobody will ever remember that bad note unless you make a big thing about it. What they will remember is that you played a great show with your heart and soul and you gave it your all. That's what counts."

Check out the entire question-and-answer session at MusicRadar.com.