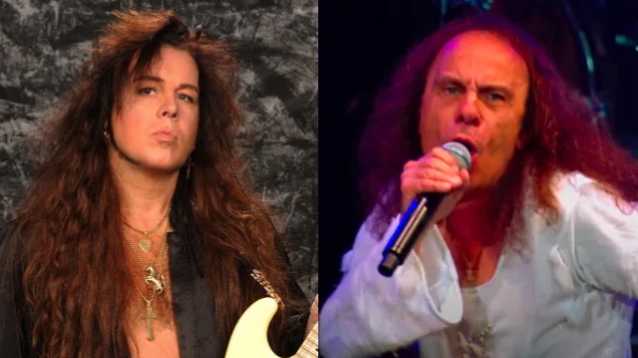 In a new interview with Robert Cavuoto of Myglobalmind, Yngwie Malmsteen was asked if he and legendary heavy metal singer Ronnie James Dio ever tried to collaborate on original music. He responded: "Ronnie and I had many late-night talks about that. We knew that we were both too hard-headed and born leaders. I think we would have complemented each other well. We had such mutual respect for each other.

"The first time I ever saw him perform was with RAINBOW when I was a little kid in 1976," he continued. "I go way back with him. When I played with STEELER, he used to come and check me out all the time. I don't know what he was thinking at the time.

"We played on stage together and in the studio more than once," Yngwie added. "It was always great, but as far as a long-term thing, it would have been like two bulls in the china shop. [Laughs] He was a great guy and [is] truly missed."

In 1999, Dio, Malmsteen, Stu Hamm, Gregg Bissonette and Paul Taylor covered the AEROSMITH classic "Dream On" for the AEROSMITH tribute album "Not The Same Old Song And Dance". Additional guitars were laid down by the LP's producers Bob Kulick and Bruce Bouillet.

Ronnie spoke about Yngwie in a 1985 interview with Steve Newton. Asked if he thought Yngwie could carry the torch as one of the leaders of the neoclassical style pioneered by DEEP PURPLE and RAINBOW guitarist Ritchie Blackmore, Dio said: "That's a distinct possibility. It could happen. Yngwie has to learn how to write first. That's his problem. He's a great guitar player, and he can play all the things that Ritchie can play, and he probably plays most of 'em a lot faster. But Ritchie knows how to write, he knows how to get the best out of his instrument, whereas Yngwie, at this particular point, is still learning; he's still very young; he's learning his craft. He's got a lot more years to go before he's gonna be the one who can take that torch from Ritchie."

Yngwie's new album, "Parabellum", will be released on July 23 via Music Theories Recordings/Mascot Label Group. Only four of the songs on the LP feature vocals. The album title is Latin, translating as "Prepare For War".