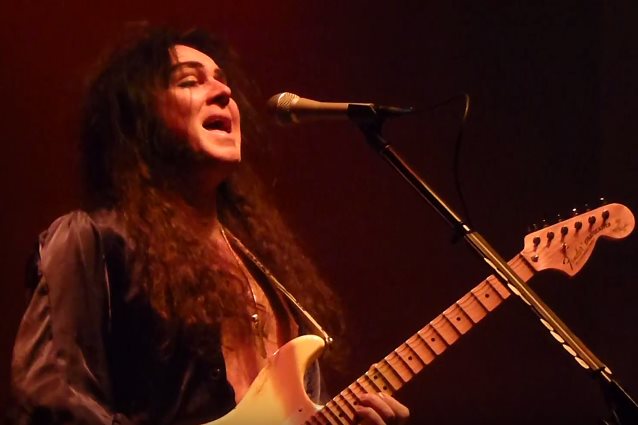 Metal Wani's editor in chief Owais "Vitek" Nabi recently conducted an interview with legendary Swedish guitarist Yngwie Malmsteen. You can now listen to the chat below. A couple of excerpts follow (transcribed by BLABBERMOUTH.NET).

On whether he has considered working with singers like Jeff Scott Soto, Joe Lynn Turner and Tim "Ripper" Owens again on an album or a tour:

Yngwie: "Actually, no, I have not, because I found myself very much… I'm very comfortable singing myself, first of all. Secondly, there's a certain disconnect when you write the song and you have someone else sing it for you. And it's kind of like a fakeness about it. I always wrote everything — I wrote all the lyrics, I wrote all the melodies, everything; it's just somebody else sung it. And to me, the singer is nothing else than a different… like a bass player or a keyboard player — they're not more important than any other musician. And they, unfortunately, seem to think that they are. And I've kind of had it with their sort of… self-absorbed sort of way, and I'm very much against it. No. I don't like that. I don't like any of those people, and I don't like to do anything with them ever again."

On illegal music downloading an albums being leaked well ahead of their release dates:

Yngwie: "It's a horrible thing. And if it weren't for the fact that the music itself is so rewarding to create, I don't think I would have done it anymore. Because it's like somebody… I don't know… It doesn't matter what you make — if you create a movie or build a car or whatever, it's the amount of blood, sweat and tears and money and everything that goes into it that needs to be rewarded. Funnily enough, I was talking to my son about this — I think there might be a small resurgence of the vinyl scene again, so I might start doing that too. It's a problem, definitely, in a sense where you don't feel that you get the financial reward that you should get, but the satisfaction of creating a record, a full album, and listening back to it and actually going, 'Shit, this is pretty good. I did well.' That is an amazing feeling, because it's [part of your] legacy that will never go away. Long after I'm gone, it'll still be there. So I don't think it's… Just because the money part is… you're being robbed, basically… I still love doing it. I still love to go in the studio and write and all that."

**Update**: After this article was posted on BLABBERMOUTH.NET earlier today, Owens took to Facebook to respond to Yngwie's claim that he wouldn't work with any of the above-mentioned singers again. Owens wrote: "Pretty sure it's because we all quit. Hahaha. Blah blah blah!" Tim then added: "Let [Yngwie] enjoy the singing!" 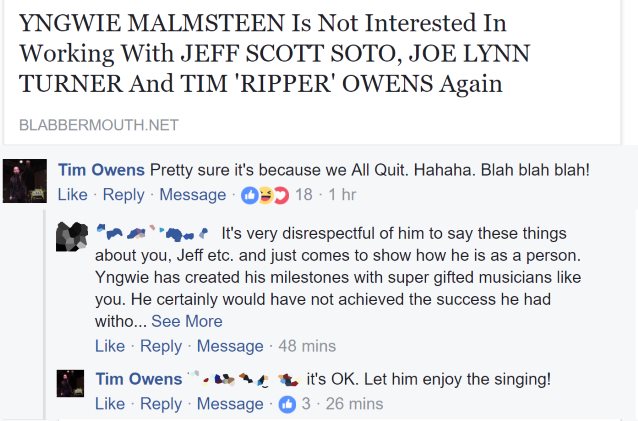