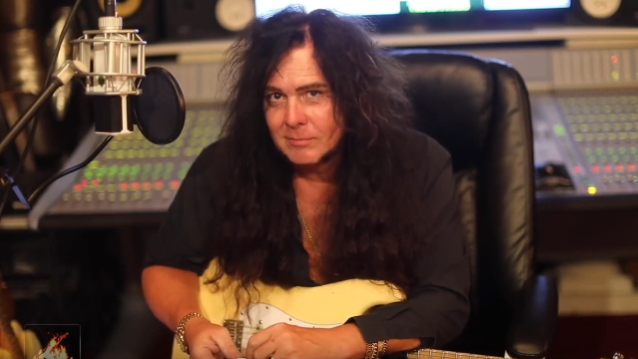 YNGWIE MALMSTEEN: 'No One Tells Me What To Do; I Am The Sole Decision Maker In All Matters'

Yngwie Malmsteen says that he is the "sole decision maker in all matters" related to his albums and live performances.

The legendary Swedish guitarist, who turned 57 last June, made the comment while responding to fan-submitted questions via video.

Asked by a fan to to tell his "management" to get him "better musicians than the ones" his management "has given" him, Yngwie responded (transcribed by BLABBERMOUTH.NET): "My management doesn't tell me what to do. I am the sole decision maker in all matters when it comes to my music, the people I hire, the people I fire, whoever plays on my records, whoever [doesn't] play on my records, whoever plays on my tours. These are all my decisions. Besides, I own the management company. So, yes, I can tell myself to get better musicians. I think that's a big insult to the musicians I have right now. I think they're exceptionally good, and they're as good as any others that have ever been involved with me before.

"If you are so longing for other musicians, you're more than welcome to go listen to them and ask them to do what they wanna do, what you want [them] to do," Yngwie added. "But with me, this is what you get. Okay? And the decisions are made by me — solely by me. I make decisions on how my records are made, how my tours are being made — everything. Okay?"

Malmsteen now handles much of the lead vocals himself in his own band, backed by a lineup that includes keyboardist Nick Marino, bassist/vocalist Ralph Ciavolino and drummer Brian Wilson.

Four years ago, Jeff Scott Soto, who sang on Yngwie's first two albums, 1984's "Rising Force" and 1985's "Marching Out", engaged in a war of words with the Swedish guitarist over the fact that Malmsteen claimed in an interview that he "always wrote everything," including the lyrics and melodies, and simply hired various vocalists to sing his material. Soto told the "US American Made Guitars" show that "it's false information" to suggest that he contributed nothing to Yngwie's early albums "because we co-wrote [some of] those songs together. I actually authored those songs," he said. "For him to say, 'I wrote every lyric, every melody,' it's absolute falsity. And he's speaking out of whatever anger or whatever throwaway conversation he might be having, but when it's put on text, it comes across as very crude and very arrogant. So, of course, I don't take that kind of stuff too personally."

In the days after Yngwie's original interview with Metal Wani was published on BLABBERMOUTH.NET, several of the guitarist's other former singers — including Joe Lynn Turner and Tim "Ripper" Owens — responded on social media, with Turner describing Malmsteen's statements as "the rantings of a megalomaniac desperately trying to justify his own insecurity." This was followed by a retort from a member of Yngwie's management team, who wrote on Malmsteen's Facebook page that the three vocalists "came out enraged, spitting insults and profanities" at the guitarist because "Yngwie said something that they didn't like." The management representative added: " It's very unfortunate that these past hired vocalists must resort to mudslinging and insults to elicit any kind of media attention towards them. Such classless, puerile words are ungentlemanly at best and absolutely disgraceful at worst."