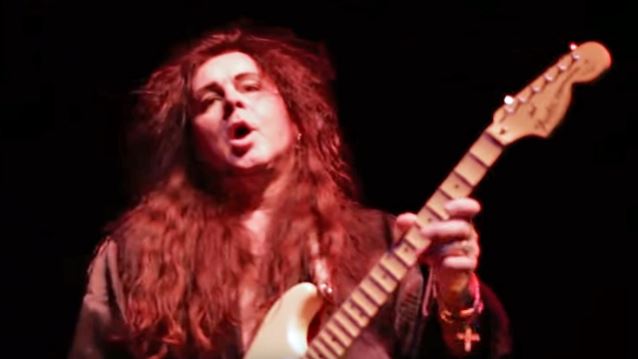 Just a couple of weeks after announcing that his new album would be called "World On Fire" in an interview with Seymour Duncan and a subsequent press release about the launch of the "Generation Axe - A Night Of Guitars" tour, legendary Swedish guitarist Yngwie Malmsteen appears to have decided against using the title for the upcoming CD. Speculation is that the name was scrapped due to the fact that GUNS N' ROSES guitarist Slash released an album with the identical title less than a year and a half ago — something that Todd Kerns, the bassist for Slash's backing band, MYLES KENNEDY & THE CONSPIRATORS, humorously called Yngwie out on in a tweet over the weekend (see below).

A new statement on Malmsteen's Facebook page reads: "Yngwie Malmsteen's new album is not called 'World On Fire'. He has a song called that. Album title not yet released."

Yngwie's new studio album is tentatively due in April. He told Seymour Duncan about the CD: "I spent two years [working] on it, touring, recording, touring, recording. And that's much, much better, actually, in a way. Back in the day I would write the songs then rehearse them with some musicians, then go and do a backing track and we'd record it, mix it, learn the songs to go play them on tour, then do it all again. That way isn't necessarily conducive to making the best music, y'know what I mean? So in a very, very backhanded way, this weird twist of fate in the music industry has actually made it a more inspiring environment, for me at least. I can write anytime and record anytime. My recording studio is always open, 24 hours. I can just record when I want and it's a beautiful thing."

Asked what the new record sounds like, Malmsteen said: "It's a Malmsteen record. [Laughs] But I would say it's a little different. First of all, I do all the lead vocals on it. Any time I did lead vocals in the past, I was singing blues stuff. This time I decided to do lead vocals in my style of songwriting, so it's different in that way. It's a very hard-hitting album and some parts are very advanced, very complicated. But it's a broad record. It's definitely a must-listen-to! It's finished and it's been delivered to the label in Japan so I would expect it to be released in about two months from now."

In addition to Malmsteen, the "Generation Axe" tour will feature performances by Steve Vai, Zakk Wylde, Nuno Bettencourt and Tosin Abasi. The trek will launch on April 5 in Seattle and will hit the road for 26 performances in North America.

LOL!!! Blabbermouth STOP making up stories!YNGWIE MALMSTEEN Scraps 'World On Fire' Album Title After Being Called Out By SLASH's Bassist 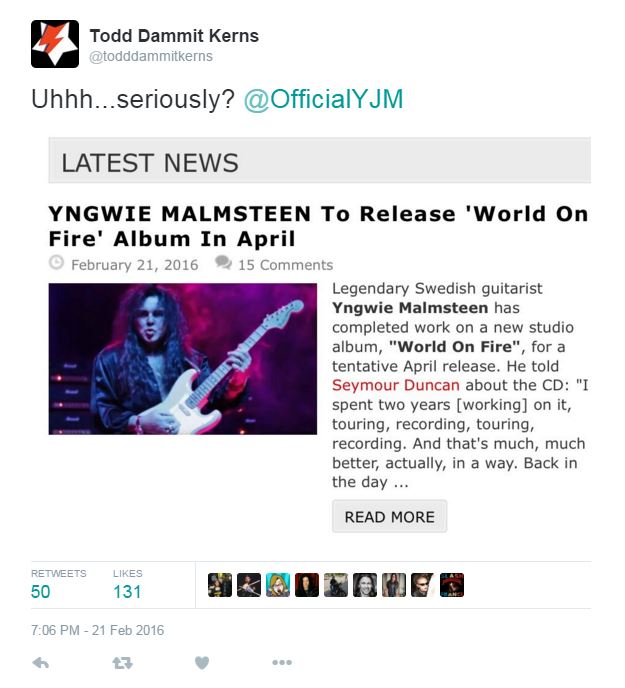