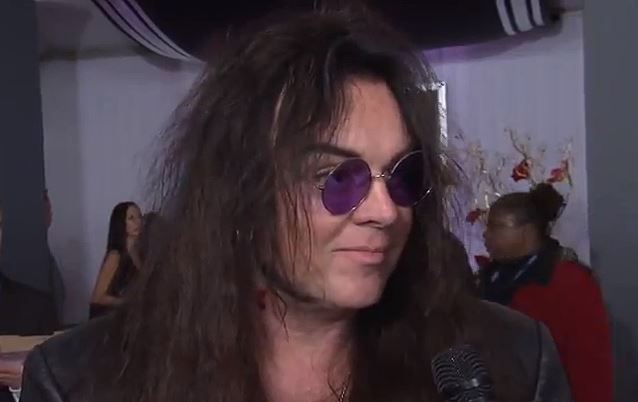 YNGWIE MALMSTEEN: 'The Music Industry Died Because Of The Piracy'

Justin R. Beckner of Classic Rock Revisited recently conducted an interview with legendary Swedish guitarist Yngwie Malmsteen. A couple of excerpts from the chat follow below.

Classic Rock Revisited: Do you ever get caught up in thinking about commercial appeal of what you're writing or composing?

Classic Rock Revisited: Is that a good thing or a bad thing?

Yngwie: Well, first of all is very bizarre, especially for someone like me. When I started out, it was very much like the guy with the big cigar in a big office saying, "I'll give you a record deal, boy." You had tour support, tour buses, local A&R people, the whole nine yards. I did that, but it's all gone now. It can be for better or worse, because if you don't have name recognition now. If you want to start out now, how the fuck do you do it? Back in the day, DEF LEPPARD said if they could get a few singles on MTV, they'd be able to make it, and they did. That happened with a lot of bands who did that back then. Now we have YouTube, but there are billions of videos and musicians on there and if nobody knows your name, nobody's going to look you up. It's a little bit weird, but in that sense, the music industry situation is really bad for whoever wants to start out now. The good part is that there is no longer this slavery to a certain format going on, where in the '80s, if you didn't follow format, they wouldn't give you the time of day. You had to conform to get a shot at a record deal. That's gone now, and it's bizarre.

Classic Rock Revisited: The Internet changed a lot for the industry; piracy has certainly had a hand in changing the game. Do you think that piracy can be beneficial to some of those bands starting out? How has it affected you?

Yngwie: How could it possibly be positive? If you go into a store and you see a car that you like, you can't just drive off with it. The cost and the blood and sweat and tears that go into making music is the same thing, it's not free. Try telling the engineer and the producer that they have to work for free. It's utterly bizarre. It's like just going into a store and taking things off the shelves. It's stealing. The reason there are no bands coming out now is that the money that was once there is not there anymore. So what happened was, in essence, by pirating music, you kill the music industry. The music industry died because of the piracy, and now all the fans will have no new music. Isn't that wonderful? It's a direct consequence of that.

Classic Rock Revisited: I think that, with piracy, we've lost the album art, the liner notes, the waiting in line to get the next record. It seems that there used to be this aura of awesomeness that used to surround a new record being released. Now it's just a click away. One sad little click.

Yngwie: Yeah, that's another aspect of it that I totally agree with what you're saying. But I think that kind of got lost with the CD a little bit too. I think when the LP went, that's when the art went. You know, when I was a little kid, I used to record cassette tapes for friends. So this music-sharing thing has been going on for a long time and the Internet just sped it up.

Classic Rock Revisited: It seems to me that over the years, you've been portrayed as a musical dictator of sorts. Most bands talk about the glory of collaboration and all the great things that come out of that. I find it interesting that you feel differently.

Yngwie: It's funny; I was just talking to someone about this the other day. Yeah, you've got Mick Jagger and Keith Richards, and you've got VAN HALEN, who wrote as a team, and that's great for them, and I love that. For me, I look at it in the way that I am an artist. An artiste. When you're a writer, you write the whole book. When you're a painter like Da Vinci, you don't say to someone, "Hey, come over here and help me with my painting." There are a few reasons why I work this way. First of all, I'm so full of creativity that I don't need any other input. The other is that I feel so strongly about my work; it's like a burning passion to create something that is uniquely me. This comes with the full realization that you may love it or you may hate it. But this is what I'm going to do, and I'm not about to have any kind of discussion with anybody about how it should be done. I'm a very serious creative person. I don't compromise, because I don't collaborate. I tried it and I hated it every time and I was never pleased with the end result. I've been doing this way too long to change how I do things now. I'm not doing things this way because of some egotistical dictator type of reason. Ask Rembrandt if he would have liked for someone to come and paint in his paining. That's exactly how I approach it. I have to love what I do. If other people love it, I'm happy. If other people hate it, I'm still happy because I'm doing what I want to do. I'm a tennis player, I'm a boxer — I don't play team sports. I'm not a team player; I never have been and I never will be. In tennis, if I win, it's because of my serve or my backhand. It's a battle and is a challenge to myself. After it's over, I don't want to say, "Good job, pal, I couldn't have done it without you." I can't live like that. It's a lot of work to do things like that, but that's how it has to be.