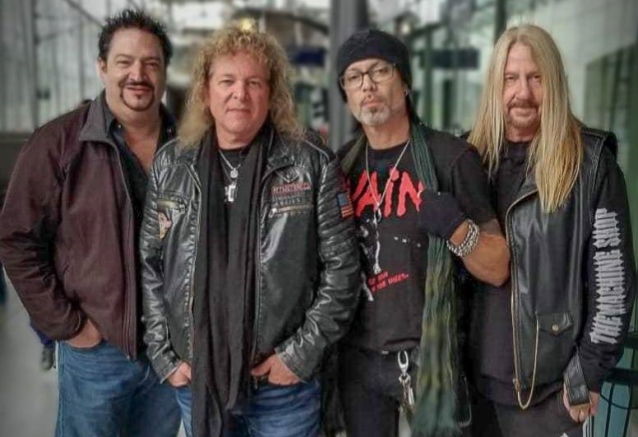 Y&T has been forced to cancel its previously announced 2022 European tour in order to allow frontman Dave Meniketti more time to recover from the radiation treatments in his battle with prostate cancer.

Earlier today (Tuesday, July 19),the legendary California rockers issued the following statement via social media: "As many of you know, earlier this year Dave Meniketti was diagnosed with prostate cancer. He has just completed radiation treatments, the side effects of which have become stronger and more disruptive to his daily life. His doctor says these will likely last for 4-6 months, which is through the band's entire Europe/UK tour.

"While he can play an occasional 90-120-minute show, it is not wise for him to push his body on a rigorous 2-month tour—that will take too much toll on him. We need to give Dave the time to fully recover before he can consider doing an extensive tour. Therefore, we must cancel this year's Europe/UK tour. While we are all disappointed, we look forward to having Dave back in full form for years to come.

"Rather than postpone yet again, we feel it is best for the fans that we cancel the tour and we have requested that each venue refund all ticket holders; please contact the venue and/or the vendor where you purchased your tickets.

"Thank you for understanding that Dave's health takes priority."

Earlier this month, Meniketti, who went public with his prostate cancer battle in February, wrote on social media: "It's been a strange 7 months with 4 blood tests, 2 hour-long MRIs, 2 CAT scans, a PET scan, a hospital procedure with radioactive seeds implanted, an office SpaceOAR Gel procedure, and 28 radiation treatments with an awesome futuristic machine. Started out super stressful waiting for all the results to come in from each test, then reconciled with it all and was ready to just get it done.

"Even with all the above, it was by no means anything I should ever be whining about in comparison to those who are going through life threatening cancer treatments with chemo. I have massive respect and admiration for those dealing with that. I had it easy in comparison.

"Yes, there have been side effects, which are expected to last for 4 months, disrupting my daily life, but I'm doing well and happy to be finally finishing what I expect/hope will have rid me of prostate cancer."

The 68-year-old guitarist/vocalist discussed his diagnosis and treatment during an appearance on the April 20 episode of SiriusXM's "Trunk Nation With Eddie Trunk". Regarding how he found out that he had cancer, he said: "Back in 2018, I hurt my back and was completely out; I mean, I could not play. We had to cancel an entire European tour in the fall, which we do religiously every year. And I'm laying on my back and I'm in amazing pain and it was the first time anything like that had ever happened. But one of the things that I was thinking about while I was laying there is, 'Wow, I haven't had a PSA test,' which is the blood test that you have to screen yourself for possibly having prostate cancer. And I'm really good about getting my yearly exams and everything else, and I realized that I'd skipped a year or two; I think it was the longest I'd ever gone without getting my yearly physical or something. So I thought, 'Okay, well, I'd better get back on [track] here.' And I went and I had my PSA test and it came back high. It was over the average… It's like zero to four, anything in that range you're okay, and I was over that by a little bit; I was like 5.3 or something. So I went in to see my urologist, and he said, 'All right, we're gonna have to take a biopsy. And we'll just do a simple one in the office and we'll basically send that biopsy off and see what's happening.' Well, it came back negative. But then he said… A couple of weeks later, I was all, 'Okay. Great.' And then a couple of weeks later, he goes, 'Well, I sent that same biopsy to this other lab that does this type of thing…' And I can't remember what it is, but basically they look at the biopsy and they figure out whether or not maybe he just missed the area where it really was. I mean, the prostate's not very big, but if you're taking 12 little samples of it, snippets of it, you could very well miss the actual area where if there was cancer, if it was there or not. And so that came back as a 47 percent chance or more that I did still have cancer but they just missed it. So he said, 'So here's what we're gonna do. We're just gonna watch. We're gonna have you take a PSA test every six months, and we're gonna watch it.' And it went down a little bit the next time, and then it went up, but it wasn't much more different than where it was the first time it was up. And so we just watched it and watched it. And I kept asking, I go, 'Well, I'm still over.' He goes, 'Well, there's a lot of people that can be over that number four and still be okay. It's just a strange thing; some people just live with a higher number. But we're just gonna watch it.' And he goes, 'If it spikes up a couple of numbers or something like that, then we're gonna do the next step.' Well, just after December of last year — at the end of the holiday — I went in about December 30th or so and had my PSA and it was 6.25. And I said, 'Okay, this is getting scary.' And I went back to him and he said, 'All right. We're gonna do the next step,' which is take an MRI, a prostate MRI, which literally takes thousands of slices of pictures of your prostate, so they can really tell whether there's something in there. And sure enough, there was. So he said, 'Okay, you have prostate cancer. So now we're gonna take you into the hospital and do another biopsy which is gonna be guided much more clearly, 'cause we know now where this thing is.' And so they took the biopsy, and he said, 'You're lucky.' He goes, 'We've gotten it pretty early here, and your scores are really good.'"

According to Meniketti, he was given "two or three" treatment options for his prostate cancer. "One of them is to just take out the prostate completely, and the other one is to treat it with radiation," he said. "And I opted for the second because there are potentially more problems with taking it out at my age. When you're younger, it's not nearly as big of a deal, but there's more problems potentially, like I say. And the outcome for both is exactly the same. So it's, like, 'I'm gonna deal with this.' So [my wife] Jill and I researched it in detail online, we talked to, of course, my urologist and then met the oncologist that would get involved with this decision. And they all said exactly the same thing, that we had been researching and hearing from other cancer survivors and such, that if you do this particular two-stage process, you've got as good of an outcome as taking out the prostate completely. So I indeed opted for that. And it's basically they insert these radioactive seeds called brachytherapy, and they put it straight into the prostate and they put about 30 or 40 of them in there and they do about 70 percent of the work at killing the cancer. And they just stay there forever, but they have about a six-month amount of putting out full radiation and then after that they pretty much die off. I had it about three weeks ago, almost, and I was kind of concerned, 'cause I had shows to play, and the first one was the Fillmore one week after I had that surgery. And I was, like, 'Can I do this?' And I was asking both doctors, and they said, 'Yeah, you're probably gonna be just fine. You might have a little bit of pain,' and so on and so forth. But I made it through. And then the next week was last weekend, and both shows went off great. And I had not that much pain overall, so it was not too bad."

As for the next step in his treatment, Dave said: "Five weeks after they insert those seeds, I go for external radiation, and that's five straight weeks of that five days a week. And it's very targeted. They, I guess, give you these little tattoos — which will be my first tattoos, by the way. [Laughs]"

Meniketti went on to say that this was one of the best treatment options for his age. "I'm 68 years old — I don't mind telling you that, because I'm proud of the fact that I've still got it as far as my voice is still there, I can still play guitar, the band sounds great, so I'm not worried about it," he said. "And [the radiation] starts about three weeks from now — somewhere around there; maybe two and a half; I haven't gotten the date yet from the oncologist when that's gonna start. But Jill, who is my manager and my wife, had set it up so that I wasn't gonna play any shows for at least a month after the end of that five-week treatment. Because even though I don't lose my hair or I don't get sick or anything like that, you will potentially lose some energy midway through the treatment because you're getting doused with radiation. So it's bound to happen. But it's not chemotherapy, so there's nothing like that type of thing."

Dave concluded by saying that while prostate cancer is the most common type of cancer in men, with one in eight men getting it, it is also one of the most treatable, with a survival rate of over 90 percent after 10 years. "This is one of those cancers, if you catch 'em early, you can be one hundred percent fixed — it's over; it's done; you're sorted," he said. "I mean, sure, it could come back at some point, but even if it does, they can treat it again. You usually outlive this cancer, if you get it early enough. So, luckily, I have gotten it early enough. And the urologist and the oncologist both feel that at the end of this five-week radiation therapy I should be done. And then I will continue to get PSA tests more frequently to really double check to make sure that the numbers go way down."

The iconic Bay Area rockers' latest studio album, "Facemelter", came out in May 2010 via Frontiers.

Video of Y&T's July 15 performance at Y Uptown Theatre in Napa, California can be seen below.

***IMPORTANT ANNOUNCEMENT***
As many of you know, earlier this year Dave Meniketti was diagnosed with prostate cancer....