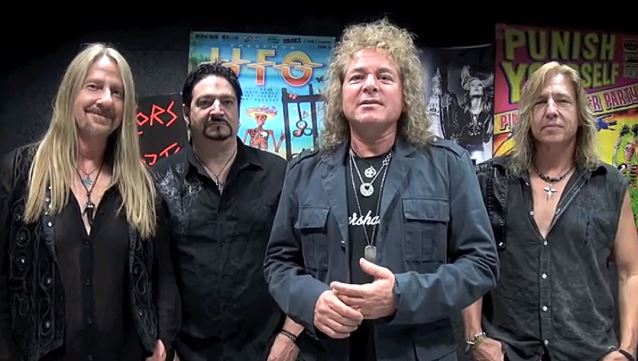 RockNLive.org conducted an interview with California rockers Y&T when the band performed at Le Forum in in Vauréal, France on September 28. You can now watch the chat below.

Following original bassist Phil Kennemore's untimely passing from lung cancer in early 2011, the band carried on the legacy that is Y&T. With Brad Lang on bass and vocals, Y&T prove their continued strength with "Live At The Mystic", a double live CD recorded at the legendary Mystic Theatre in Petaluma, California, one of the most popular venues that Y&T play every year. The two-CD set includes 22 songs recorded over two nights in November 2011, including many tracks never before released on any other live Y&T CD. The amazing heat to the tracks showcases the power of the band as it currently sounds, playing songs from "Facemelter" as well as all the hits and fan favorites.

"Songs like 'Dirty Girl', with its extended solo section of John Nymann and myself tearing into a nearly three-minute back-and-forth solo was especially a great performance," said guitarist/vocalist Dave Meniketti. "Also, many of the classic tunes like 'Black Tiger', 'Don't Wanna Lose' and 'Mean Streak' were very well played and show some of the best live performances of these songs we've ever recorded. But I also feel strongly about our more mastered performances from our latest 'Facemelter' CD. The energy and much more refined versions of these songs, now that we've really had some time to hone in the vibe of these tunes, make it that much more special of a live recording."