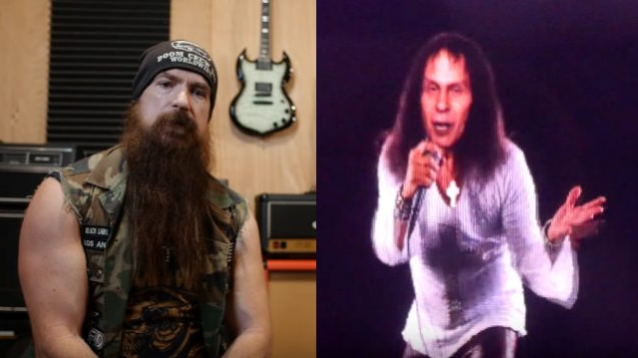 ZAKK WYLDE Has 'No Problems' With RONNIE JAMES DIO Hologram: 'I Think It's Awesome'

Zakk Wylde says that he had "no problems" with the recent "Dio Returns" tour, which featured a hologram of legendary metal singer Ronnie James Dio performing alongside a living backing group consisting, in large part, of Ronnie's onetime DIO bandmates.

The Dio hologram production used audio of Ronnie's live performances from throughout his career, with the DIO band playing live, consisting of Craig Goldy on guitar, Simon Wright on drums and Scott Warren on keyboards, along with Bjorn Englen on bass. Also appearing with them were ex-JUDAS PRIEST singer Tim "Ripper" Owens and LYNCH MOB frontman Oni Logan.

In an interview with the "TODDCast Podcast", Wylde stated about "Dio Returns" (as transcribed by BLABBERMOUTH.NET): "I think it's great. All it's doing is keeping our favorite artists' memories alive — whether it's seeing cover bands or anything like that. And put it this way: if you go and see it and we all have a great time, all you're doing is celebrating Ronnie's greateness and how awesome he was. I don't see any problems with it. It's entertainment. If you go see it, and if you love Ronnie James Dio, and we all do, you have a great time. It's no different than when I see any of my friends that play in cover bands. I've got my buddies that play in ZOSO and everything like that — they're an amazing [LED] ZEPPELIN cover band, and every time we go see 'em, we have a great time. It's just awesome. I think it's just a celebration of your favorite bands and your favorite artists. So I think it's awesome. I have no problems with it at all."

This past September, Ronnie James Dio's former wife and longtime manager Wendy Dio said that she decided to pull the plug on the hologram of the legendary metal singer because she "wanted to see real Ronnie." Speaking about how her reaction to the hologram evolved over the years, she said: "When I first saw it, I cried. Then I got used to it because it wasn't Ronnie. And then we took it out [on tour]. The first [version] was not that good. The second one was a lot better. But I decided that I don't wanna do it anymore; I decided I want real Ronnie. So we're working on a stage with the DIO band, which will be going out in March [of 2022]. Instead of having a hologram, it will have film of Ronnie with the live band playing and with special effects and everything else. So that's what we're working on. We're working on it with Paul Dexter [who was Ronnie's lighting designer and stage designer for years] and a bunch of other people. And also the Eyellusion people, who did do the hologram, are doing a bunch of special effects for us with it."