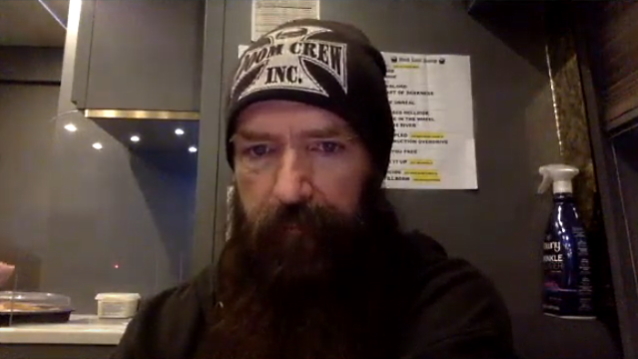 Zakk Wylde says that he is "really happy" with his contributions to the upcoming Ozzy Osbourne album.

The guitarist, who has been a member of Ozzy's solo band on and off for nearly 35 years, was excluded from the legendary heavy metal singer's 2020 LP "Ordinary Man", which was the first Osbourne effort to be produced by Andrew Watt.

After Ozzy recently confirmed that Zakk makes an appearance on his "work-in-progress" follow-up to "Ordinary Man", which is tentatively due in early 2022, Wylde talked about his involvement with the LP during a chat with "The Cassius Morris Show". He said (as transcribed by BLABBERMOUTH.NET): "On this one, I didn't have anything to do with… Basically, everything was already written. I would change a few things here and there, going into certain riffs or something like that — you know, do my own thing to 'em. But it was pretty much already done. But kind of how we did — [2001's] 'Down To Earth', I think, was more like that where everything was pretty much written before I got in there. So I just do my thing, put my solos and everything like that. But it was great in regards that Eric Clapton is on it, Jeff Beck and Tony Iommi. If you have told 14-year-old me growing up in my parents' house practicing in my bedroom that I was gonna be on a record with all my heroes, [I] would have been, 'Forget about it.' So, it was definitely an honor playing rhythm guitar on those tracks with the guys. But, yeah, I'm really happy with the way it came out."

Zakk also confirmed that he laid down his parts for the new Ozzy LP at his own home studio, the Black Vatican, which he has used for most of the recent BLACK LABEL SOCIETY recordings.

Asked how Osbourne is doing health-wise after suffering from several medical issues last year, including a fall, neck surgery and hospitalization for the flu, Wylde said: "I text him and just make sure he's doing okay with his working out and everything like that and doing everything the doctors tell him to do as far as his therapy and everything to get his neck and everything like that better and back on track. He wants to get back out and start touring again. The last show we did was going into 2019, New Year's Eve at the Forum [in Los Angeles]. And we had a blast. And Ozz was, like, 'Man, we should do this every year' and everything like that. So he was super pumped for that. And that's where it ended. The gameplan is, obviously, to get him back up and running so we can go back out and start playing again, doing what he wants… I just said, like, 'Ozz, just wait until you're ready.' There's no sense in rushing it. No one is going away. As soon as they announce that Ozz is gonna be doing some shows, everyone's gonna go to the show. So I was just, like, 'Ozz, everybody loves you. I don't you have anything to worry about. When you're ready and you feel like you're ready to get back up on the lifting platform for your benches and squat and your deadlift, then we'll go do what we've gotta do."

Ozzy recently revealed that 15 songs have been recorded for his upcoming LP which is once again being produced by Watt.

Zakk previously told Music Radar about his contributions to the new Ozzy album: "The new Ozzy stuff is sounding great. And for sure, it's an honor to play on a record with all my heroes. It's pretty cool… I can't wait for everyone to hear it. I've always loved 'Blow By Blow' and 'Wired', but honestly, every record Jeff Beck has put out is amazing."

Wylde went on to say that Beck "definitely sounds slamming" on the upcoming Ozzy album. "The same goes for all the guys — what Tony Iommi played, and then Eric Clapton and Jeff Beck, it's all killer, for sure. On those tracks I'm playing rhythm guitar for my heroes… it's crazy! It sounds awesome and I'm beyond honored to be doing it."

Last month, Ozzy told Metal Hammer magazine that his new album will be "similar in tone to 'Ordinary Man', but I can't describe it completely. I've not heard it for a while because it keeps going over to the next person to add their parts — we're fucking around with it all the time," he said.

Seven months ago, Ozzy told U.K.'s Metal Hammer magazine that he and Andrew had completed more than a dozen for his next studio LP. "My only concern right now is finishing the bloody thing," he said. "We've got the same production time as the last time, so there's definitely going to be some similarities. But you'll just have to wait and see what you think."

In December 2020, Watt told Guitar World that he and the BLACK SABBATH legend were "halfway through" the new LP. "There's some songs on there that are like eight or nine minutes long that are these really crazy journeys. I'm really excited about it," he said.

Like "Ordinary Man", which featured Watt on guitar, Duff McKagan (GUNS N' ROSES) on bass and Chad Smith (RED HOT CHILI PEPPERS) on drums, Ozzy's next album will feature guest appearances by a number of other notable musicians. "There's a bunch of people involved," Andrew told Guitar World. "I can't say for sure until the end, but I started doing a bunch of basic tracks with Chad and Robert Trujillo [METALLICA], who used to play in Ozzy's band. And Taylor Hawkins [FOO FIGHTERS] also came in and played a bunch on the record as well, which adds a different flair — it kind of harkened back to Ozzy's '80s era, in a great way. And I think it's so cool for a rock fan to be able to listen to half an album with Chad Smith on drums, and then you flip it over and you get to hear Taylor Hawkins. And you know, the last album was really special for everyone involved. And so there was no point in Ozzy or me doing this again unless we thought we could bring something new to the table. And I feel like we're achieving that."

Wylde previously told Classic Rock that he wasn't disappointed to be excluded from "Ordinary Man". "Not at all," he said. "I thought he and Andrew Watt did a great job. I understand why I'm not in the studio. Ozz once said to me that he didn't want to be the lead singer in BLACK LABEL SOCIETY: 'You have your own thing now, so go to it.'

"I don't have to be involved in everything Ozz does. I'll always be there for him and Sharon. If they call now and ask me to go over to feed their dogs for three days… I'm there."