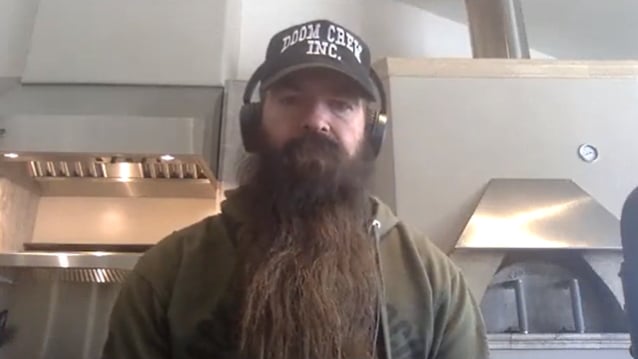 Legendary guitarist Zakk Wylde (OZZY OSBOURNE, BLACK LABEL SOCIETY) recently joined Sara of the Philadelphia radio station 93.3 WMMR to talk about "None More Black", the new box set from BLACK LABEL SOCIETY. Zakk also remembered his first meeting with Ozzy Osbourne; shared his thoughts on pop stars with rock aesthetic, like Post Malone; the Mark Weiss wedding jam that's been making the rounds on YouTube; and how heavy drinking in his younger years may have actually saved his life. Plus: when will we get new tunes from BLACK LABEL SOCIETY?

"Put it this way: If you're gonna have Eddie Van Halen, David Gilmour, Al Di Meola and Frank Marino all jamming at an [event], all they're gonna do is just be themselves; there is no competition," he explained. "Keith Richards is just gonna be Keith Richards. Keith's gonna do what Keith does. If Keith is a pepperoni pizza and Eddie Van Halen is garlic and mushroom, I'm just saying that's what you are. There is no competition.

"I remember Father Steve Vai, Stevie said it best. He just goes, 'Zakk, there is no best.' He goes, 'It's what's your favorite.' 'Cause he loves Tom Waits; that's, like, his favorite singer. He loves Tom Waits. But, like, who's your favorite singer then? Is it Tom Waits or is it Pavarotti? It's, like, who's better? Is it Adele or is it Stevie Nicks? It's whoever touches you. What's your favorite LED ZEPPELIN record? To me, they're all amazing. It just depends on what mood you're in and what album you've worn out. You're, like, 'I'm burnt out. I'm gonna listen to 'Presence' now. I can't listen to 'Physical Graffiti' anymore.' They're all great. It depends on what mood you're in. That's the great thing about music."

Earlier this month, Zakk told Detroit's WRIF radio station that BLACK LABEL SOCIETY recorded "about 30 songs" for its next LP. The follow-up to 2018's "Grimmest Hits" is tentatively due in November.

Prior to the coronavirus pandemic, BLACK LABEL SOCIETY spent a couple of years touring in support of "Grimmest Hits".