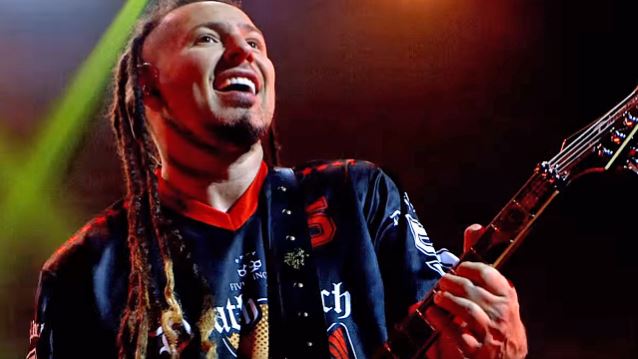 Mick of the 99.5 The X radio station conducted an interview with FIVE FINGER DEATH PUNCH guitarist Zoltan Bathory at this year's edition of the Carolina Rebellion festival, which was held May 6-8 at Rock City Campgrounds at Charlotte Motor Speedway in Concord, North Carolina. You can now listen to the chat in the YouTube clip below.

Speaking about FIVE FINGER DEATH PUNCH's lyrical content and its appeal to a certain type of crowd, Zoltan said: "It's not like we really wanna be preachers; that's not [our] job. We kind of express ourselves. It just happens to be that our lyrics, our lyrical content, is aligning with a certain kind of mindset, a certain kind of people, and it's really coming from the fact… I came from a Third World… almost Third World communist country [Hungary] — you know what I mean? — where we didn't have a constitution, we didn't have the rights that you guys [in the U.S.] were born into. And so I saw that movie before — how things pan out when a government has total control over you and your life and everything you think and say and breathe. So I've seen that. So, to me, that was my rebellion of breaking out of there, and when I was a kid, I was, like, 'I'll burn this thing to the ground one day,' and we did. And every single bandmember I have is from blue-collar families, and we all fought to get here where we were, to get to this point. And that's what we talk about; that's what the lyrics [are about]: our lives and what we went through and what it really takes to get there. So it's inspirational to people, because that's kind of like what they're aligned to, that's what they hear from the music. So somebody is gonna go to the gym and hit it hard, or somebody will think about just life in general. And also, obviously, the military and those guys have the mentality — they stand up for something, they believe in something. And that is kind of the connecting element. So our fanbase just happens to be that crowd, because we think alike. It's not like we're out here to preach; we just express ourselves. But it helps a lot of people."

According to Zoltan, FIVE FINGER DEATH PUNCH's lyrics take on a variety of topics that could be useful to anyone going through a hardship.

"When I get an e-mail from somewhere in Afghanistan or from somebody out there, and they're [like], 'Man, I'm having a really hard time, but I listen to you guys and it gets me through another day.' Or guys that technically… the music talks them off the bridge. And when I hear these stories, that means, like, okay… I'm a musician — really, I'm just jumping around with a guitar on stage," Zoltan said. "The guys are out there doing something more serious, in my opinion, but this validates what we do."

It was revealed last month that FIVE FINGER DEATH PUNCH's label, Prospect Park, filed a lawsuit against the band, accusing it of allegedly trying to violate its recording contract by rushing to make a new album despite the addiction problems of singer Ivan Moody.

The group fired back, calling the suit "the latest in a long line of exploitative and abusive bullying tactics used by our former manager and current label CEO Jeff Kwatinetz to extract money from and wield power against the band."

Amidst all this, FIVE FINGER DEATH PUNCH announced a new co-headlining arena tour with SHINEDOWN that will kick off on October 18 in Little Rock, Arkansas and run into December. SIXX A.M. and AS LIONS will be along as support.