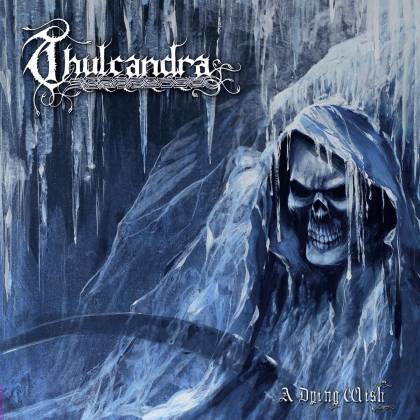 There is a lot to be said for slamming your cards down on the table on day one. THULCANDRA always made it plain where their allegiances lay: to DISSECTION's frosty spite and, to a lesser extent, SACRAMENTUM, with all the insidious melodies and fiery riffing that such a salute entails. Over the course of three studio albums, guitarist and frontman Steffen Kummerer has consistently beefed up the potential of that straightforward blueprint, peaking with 2015's "Ascension Lost". More imaginative than their myopic vision should allow, THULCANDRA have never quite hit the jackpot in terms of attention or acclaim, but the Germans' zealous commitment to the ice-hearted cause has never been in doubt. On "A Dying Wish", they indicate that the last six years have been spent streamlining and sharpening their trademark sound. While these new songs are not vastly different in tone or spirit than their predecessors, the fourth THULCANDRA album rips and terrorizes with the intensity of a debut.

It also definitely helps that "A Dying Wish" has been touched by Dan Swano's mixing and mastering hands, one of modern metal's greatest unsung visionaries. This record absolutely reeks of the early '90s, with guitar tones that hit the perfect balance between brittle and belligerent, and an enveloping cloud of atmospheric grimness that frequently seems to crackle with authentic evil electricity. Opener "Funeral Pyre" is a sublime beating down of Hell's doors, full of blistering speed and aggression, but swathed in melancholy and near-grabbable nocturnal malevolence. "Scarred Grandeur" is another song liable to dislodge your fillings, but ferocity and muscle are never allowed to crush the twisted melodic core than runs through its five, breathless minutes. And if you have ever spent quality time with DISSECTION's "The Somberlain", it will be almost impossible not to enjoy the breakneck sweep of "A Shining Abyss": as perfect a black metal song as you could hope to hear in 2021.

The closing two tracks are the most adventurous on offer. "Devouring Darkness" is every bit as harrowing, nightmarish and imperious as its title suggests, while the title track delivers a climax of epic, disorientating splendor, with old-school tropes galore and a tantalizing suggestion of progressive intent. Always a class act, but now somehow more potent and enthralling than before, THULCANDRA evoke the past with the zeal of militant masters.