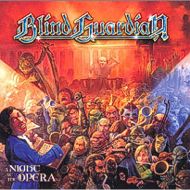 A Night At The Opera

01. Precious Jerusalem
02. Battlefield
03. Under The Ice
04. Sadly Sings Destiny
05. The Maiden And The Minstrel Knight
06. Wait For An Answer
07. The Soulforged
08. Age Of False Innocence
09. Punishment Divine
10. And Then There Was Silence

One of the most revered and respected power metal acts around, Germany's BLIND GUARDIAN have consistently produced albums that were as distinctive sounding as they were musically ambitious, and they have received nothing but praise from the metal community for their efforts—and justifiably so.

A band that is very much in control of its own destiny, BLIND GUARDIAN have always believed in overseeing every little detail of the way their music is made and recorded, and when the group finally built their own recording studio a few years back, it seemed like the perfect opportunity for them to focus on their art with minimal distractions or interferences from others.

A seemingly impeccable scenario, the above set-up has also given the group the green light to indulge in some heavy-duty experimentation, particularly in terms of how their music is recorded. As a result, the band have gone overboard in layering their material with unnecessary enhancements that sound impressively huge at first but quickly lose much of their effectiveness as the sea of backing vocals and epic-like musical sections render the material unlistenable in anything but small doses.

To the band's credit, BLIND GUARDIAN remain one of the most unique and original bands in the metal genre, and tracks like opener “Precious Jerusalem” and “Sadly Sings Destiny” are likely to be added to the list of the band's classic numbers that are destined to go down a storm in a live situation (assuming that the band can fully reproduce them on stage). Moreover, it's hard to fault A Night At The Opera's technical brilliance or the band's incredible musicianship, which has never been more stunning than it is on this effort.

While BLIND GUARDIAN may indeed have come up with heavy metal's answer to its QUEEN-produced namesake with their latest album, they have done so at the expense of their heavy rock appeal, which has been all but drowned out by the extraneous production trickery and over-the-top instrumentation.

As technically impressive as it is, A Night At The Opera is not an easy album to digest or sit through, and I, for one, hope that the band will return to a more basic format on their next release.