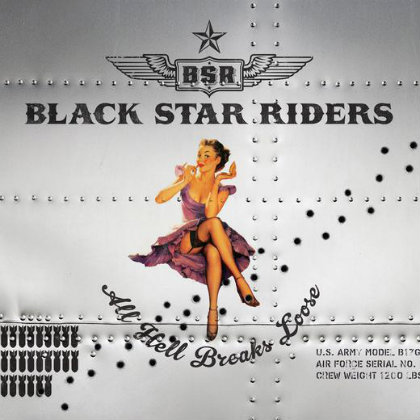 What a difference a name makes.

Had the members of BLACK STAR RIDERS, who essentially comprise the modern touring lineup of THIN LIZZY, actually dared to release this new album of original material - which bears the fittingly sardonic title "All Hell Breaks Loose" - under the latter band's hallowed moniker, it's fair to assume that all hell would have broken loose, indeed.

Bottom line: no matter how great its songs might be, the album would have been hopelessly eclipsed by the historical baggage of THIN LIZZY's past glories, not to mention the glaring absence of its long-since deceased leader and de facto "face," Philip Lynott.

So no matter what they lose in terms of name recognition, guitarists Scott Gorham and Damon Johnson, vocalist/guitarist Ricky Warwick, bassist Marco Mendoza and drummer Jimmy DeGrasso, will ultimately be glad they resisted messing with sanctified brand names AND the venerated dead with this brand new set of classic hard rock tunes.

Heck, such is the weight removed from BLACK STAR RIDERS' collective shoulders that they can even cast a conspiratorial wink at Lynott's ghost via the opening title cut's allusion to "wearing dead man's shoes," before getting on with the business at hand.

All that being said, the sonic hallmarks of LIZZY inevitably crop up, now and then - and never more so than when twin guitars harmonize on the eerily precise tribute of "Bound for Glory", the cleverly worded "Hey Judas", and even the uncommonly bouncy "Someday Salvation" ("Dancing in the Moonlight" redux) - all of which were clearly written with that proposed "next" TL album in mind.

Ditto the Celtic folk melodies dominating "Kingdom of the Lost", which clearly emanate from LIZZY's "Black Rose" days, though the song probably shares more in common with Gary Moore's similarly patriotic work of the late 1980s (think the "Wild Frontier" and "After the War" LPs),if you really want to be nitpicky. Either way, it's a well-conceived, emotional tune.

Luckily, the LIZZY ingredients just as often fade into the background, allowing songs like "Bloodshot", "Kissin' the Ground", the mildly funky "Hoodoo Voodoo", and the hard-driving "Valley of the Stones" (parts of which hark back to Warwick's old band, THE ALMIGHTY),to be released from further suspicion (as well as unfair expectations) upon their own recognizance.

In sum, there's undoubtedly quite a bit of "to Phil or not to Phil" going on across "All Hell Breaks Loose", since those involved were clearly torn, at times, between striking out on their own or playing up to the role model demanded by what might have been could a - GULP! - new THIN LIZZY album.

But if one can listen to the album through the unbiased prism of timeless classic rock that the members of BLACK STAR RIDERS are clearly extremely qualified to explore (not least Gorham, who contributed so much to its very architecture three decades ago),there's lots of high quality hard rock to be enjoyed here.