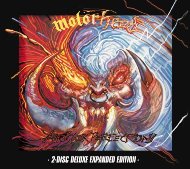 Lemmy may be God, but you get past "Iron Fist" in MOTÖRHEAD's storied discography, and the blasphemers start crawling out from under rocks and taking potshots at 'im. (Say it to his warts, poseurs!) Some weak-kneed, genitally inferior types even call "Another Perfect Day" the band's downfall, when guitarist "Fast Eddie" Clarke split the scene, replaced for a brief and shining moment by former THIN LIZZY guitar genius and questionable-bike-shorts-wearing pouf Brian "Robbo" Robertson.

Don't get me wrong — I won't exactly fight to the death to defend tepid later works like "Rock and Roll" or the craptacular "March or Die", the undeniable, beat-down-by-Sony low ebb of MOTÖRHEAD's career. But to anyone who can deny the gloriously frazzled "Another Perfect Day", with Robbo's fancy frippery adding just a smidge of respectability and fresh air to the band's booze blooze sound, all I can suggest is that you get out of rock and roll immediately. I hear JOHN TESH has some openings in his fan club.

Just listen to the bluesy shuffle and odd open chords of songs like "Marching Off to War" and "Rock It", or the steamroller-with-finesse of scorching opener "Back At the Funny Farm". Or dive into two of the best MOTÖR-singles ever, the dirty-slick boogie "Shine" and the wide-open "Dancing on Your Grave" (which sports one of the most emotive, ass-kicking lead guitar hooks in the band's history). If that melody doesn't grab you by the short hairs and make you love life a bit, you're useless, man. Dusty road rockers like the slinky "One Track Mind" make this one of the most atmospheric MOTÖRHEAD records, next to maybe the more predictably bluesy "Bomber". And Robbo adds a bit of musicality even to album closer "Die You Bastard!", a song that could have been wielded like a sledgehammer in less nuanced hands. Nuance? MOTÖRHEAD? Yeah, it sounds terrible on paper, but damned if it doesn't work like a charm here.

This reissue gussies up the original album with liner notes from a sycophantically backpedaling Malcolm Dome, whose 2K review of the record in Kerrang! earned him an onstage dedication (for "Dancing on Your Grave", of course) from Lemmy at a London gig. Remastered, with loads of pictures of flyers and 12" single sleeves and all that… but the real gem here is an entire live show tacked on to a second disc! Recorded live at the Manchester Apollo in 1983, it shows off the Robbo lineup in fine style, the maligned axeman adding some bluesy flair to oldies like "The Chase Is Better Than the Catch" and "Iron Horse (Born to Lose)" (while reportedly refusing to play "Ace of Spades"!).

At this point, the MOTÖRHEAD catalog (up to Sony debut "1916", at least) has been issued and reissued six ways to Sunday, and it's gone in and out of print more often than Lemmy's taken aim at the cig butts in the Rainbow men's room in L.A. This one may stand as the definitive document, though, thanks to the high-octane live show and nice-looking slipsleeve-over-jewel-case packaging. Put simply, most of MOTÖRHEAD's discography deserves a place in your CD collection, and "Another Perfect Day" should be near the top of the list. It's a hellacious rock and roll record in its own right, as well as an impressive transitional album, one that gave the band life after Fast Eddie and paved the way for the next twenty-odd years of ass-kicking to date.