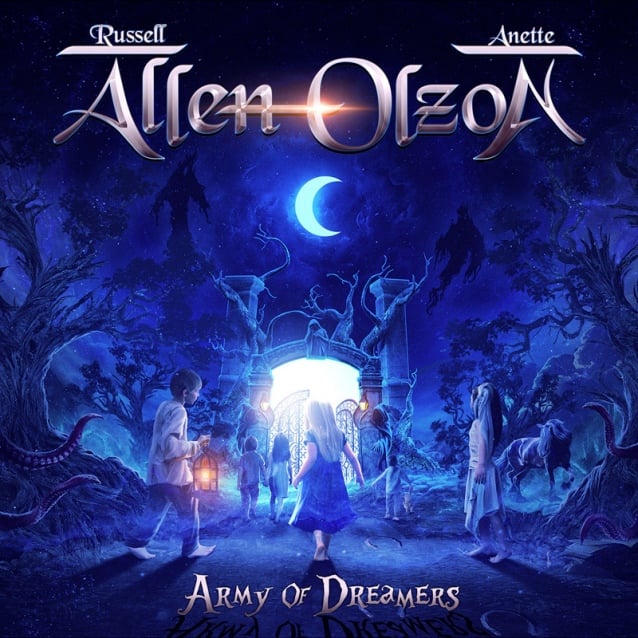 Armed with the kind of pipes that cause serious structural damage, Russell Allen can usually be relied upon to sing the living shit out of everything he records, whether with SYMPHONY X or any of the generally great collaborations he has explored over the years. Similarly, Anette Olzon has undergone an impressive creative renaissance in recent times, with particular reference to her excellent 2021 solo album "Strong" and is twice the singer she was back in the NIGHTWISH days. As a result, plenty of folk will be excited by the prospect of a second ALLEN/OLZON album, with prolific multi-instrumentalist Magnus Karlsson returning to his role as songwriter, producer and irritatingly gifted musician.

The pair's first album together, "Worlds Apart", was widely praised for getting the simple things right: massive tunes, great vocals, sumptuous arrangements. If any criticism is warranted this time around, "Army Of Dreamers" is plainly an exercise in delivering more of the same, but then when a formula works this brilliantly, why fuck with it?

Sounding like a million dollars and inhabiting a subtly unique space between symphonic metal, melodic rock and something ever-so-slightly heavier (shades of melo-death, perhaps),  these songs fulfil their remit and, most importantly, provide another sonically dazzling showcase for Allen and Olzon's respective talents. At its best, "Army Of Dreamers" outstrips its predecessor, either through sheer bombast or via some of the most insidiously sweet melodies Karlsson has penned to date. The title track is a suitably strident opener, with both vocalists announcing their arrival with verve and vivacity, but it's "So Quiet Here" that perfectly sums up the harmonious way their voices collide. Blessed with an absurdly memorable chorus, it's one of several perfect pop-metal moments here, and Olzon in particular sounds firmly in her element.

Elsewhere, "All Alone" is a towering centerpiece, with a melancholic undertow and oceans of soul; "Until It's Over" is streamlined and radio-friendly, but infused with dramatic tension and a sublime, none-more-classic solo from Karlsson. The closing "Never Too Late" starts as a misty-eyed, lighters-in-the-air confection, before taking off at a brutish gallop and blossoming into another grand and emotional chorus. Not everything hits the same heights, but even less eventful cuts like "Out Of Nowhere" and "I Am Gone" harbor little flashes of ingenuity, and vocal performances designed to uplift and disarm. All in all, another sturdy and substantial addition to the catalogues of everyone involved.