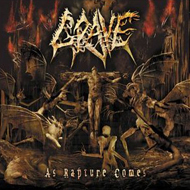 What we have here is a good old-fashioned career upswing. The 2002 release of "Back from the Grave" marked GRAVE's comeback, while 2004's "Fiendish Regression" proved that the Swedish death metal legends had no plans to hang up the gloves any time soon. On "As Rapture Comes", GRAVE has hit bloody pay dirt! It is far and away the best of the three albums, and it delivers in a faster, more aggressive style than its predecessors.

The phrase "all killer, no filler" is most appropriate in describing the heights reached on "As Rapture Comes", and that includes the 49-second soundscape "Intro - Day of Reckoning". The first thing you'll notice when the six-minute "Burn" takes off is the speedy and relentless pace of the songs. Though many tunes move into sickening mid-tempo marches at various points, in the case of "Burn" peppered with pinch harmonics, the super sonic blasting goes a long way toward disabusing anyone of the notion that GRAVE relies primarily on a churn 'n' groove style of Swedish death metal. You heard some of it on "Fiendish Regression", as tracks like "Bloodfeast" blasted away. Not coincidentally, the 2004 release marked the debut of drummer Pelle Ekegren who brought a more expansive style than was the case with Jenna Paulsson. Whether or not influenced directly by Ekegren's more capable hands and feet, the fact remains that "As Rapture Comes" charges forth like a bull on the streets of Pamplona, only slowing down long enough to jab a horn in your ass and send you flying.

Most importantly, a consistency of rage is maintained throughout the album, while each individual song is structured in a way that is both crushing and memorable. Furthermore, Peter Tägtgren's production is simply perfect, one that captures a band in all its sonic savageness by combining clarity and heft. In addition to the aforementioned "Burn", the two most memorable songs are probably "Through Eternity" and especially the "Battle of Eden", the latter also noticeable for its more controlled pace. Though I'd hesitate to use the word "catchy" in the context of GRAVE, the smoke from both hangs in the air well after the music has ended. The band has a knack for turning blinding speed into sections of grinding plod, as "Living the Dead Behind" and "Epic Obliteration" demonstrate. Top it off with a full-on Swedish death metal version of ALICE IN CHAINS' "Them Bones" and you've got yourself a mighty fine slab of death and destruction.

It would not be an exaggeration to say that "As Rapture Comes" is one of, if not the, angriest albums in GRAVE's storied career. It is heartening to think that two godfathers of Swedish death metal, GRAVE and DISMEMBER, have released such heavy and finely crafted albums in 2006. By the way, when you find the guy that pissed in Ola Lindgren's (vocals, guitar) Cheerios prior to the recording of "As Rapture Comes", please pass on to him my sincere thanks.