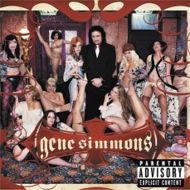 Somebody, please, somewhere, tell this repulsive, greedy man to shut the fuck up already. After years of listening to his bullshit about everything from women to money to politics, all the while watching him take the once great name of KISS and, along with his partner Paul Stanley, drag it through the mud and make it into a feeble shadow of itself, now he inflicts a solo album on us that ranks with the worst records of the year, if not the decade. "Asshole" was never more appropriately named, and I defy even the most hardcore KISS fan (of which I was one, a long time ago, who even used to enjoy interviewing Simmons from time to time) to justify this waste of time and plastic.

It's not the fact that it's not much of a hard rock record it's the fact that it's awful. After opening with a rehashed MOLLY HATCHET-type riff in "Sweet & Dirty Love", Simmons follows that with a pathetic cover of the PRODIGY's "Firestarter". Gene Simmons doing old electronica just makes him sound more out of touch than he already is. The hit list rolls on, from a schmaltzy ballad called "Waiting For The Morning Light" (co-written with Bob Dylan! Hopefully Bob didn't stick around to hear Gene's self-conscious crooning) to some half-assed lounge rock on "Beautiful" to the Eighties-style title track, which contains the immortal lyrics, "But you've got a personality/Just like a bucketful of pee."

I could go on about each individual track, but there's not much more to say. "Asshole" is a self-indulgent mess, and while Gene Simmons has every right to release it — and sucker a label into distributing it for him — the initial sales seem to indicate that no one much cares. Meanwhile, Simmons and Stanley are once again schlepping the KISS cover band around the country, Gene gloats online over his newest scheme to make even more millions, and a dwindling fan base still listens to what the guy has to say. Who's the real asshole?