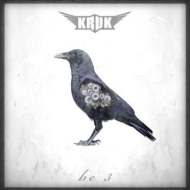 No, this isn't the black metal band, KRUK, albeit, if you hang out long enough with this one, you'll hear an out-of-place death whoop crash into "Master Blaster" on their latest album, "Be 3". This incarnation of KRUK hails from Poland and while they do boast an album in their catalog titled "Before He'll Kill You", you can forget anything remotely unholy about them, depending, of course, on how you process their tame treatment of classic rock and Eighties-based pop metal here.

DEEP PURPLE, URIAH HEEP, STYX and LED ZEPPELIN are KRUK's primary influences, yet the more direct thread of music this band draws upon trails from a conduit of American bubblegum metal circa1984 to 1989. "Calling You" and "Rising Anger" on "Be 3" are the closest KRUK gets to actually replicating DEEP PURPLE, outside of their reasonable cover of the latter's "Child in Time". Michat Kurys lays down some smooth organ on "Calling You" to present the illusion of a fluid PURPLE flair, while "Rising Anger" has as much to do with YES as it does DEEP PURPLE. As the album's strongest track, the grinding vibe of "Rising Anger" sets "Be 3" on a hopeful note, even if the remainder of the album bangs at times, pussyfoots at others. You get the feeling KRUK has yet to decide if they want to aim for a DEEP PURPLE 2.0 vibe or they're content holding a torch for obscure hard rock acts of the eighties such as MSG, ICON and ROUGH CUTT.

The KRUK collective should have enough practice at what they do, considering their first official release was a cover of classic rock cuts, "Memories". They have a grasp over certain dialects and elements of the music they love, which translates well into the fierce throb of "Master Blaster" and the swaggering pimp sway of "Burnin' Inside". Yet there's only so far they extend themselves and a decided limitation in musical focus hinders their songwriting process in many portions.

Cheers to the prog section and scorching guitar solo from Piotr Brzychcy splicing the synth-splashed cyber pump rocking out "Burnin' Inside", but the bottom line to "Be 3" is that it plays its game too safe and not always to KRUK's fullest capacity. The chained frame of mind to this series of throwback tunes might've played better in 1987 and '88 while MSG took a blind hike down the commercial highway with "Perfect Timing" and "Save Yourself".

"Miss Sometimes" gimps along with a shady sense of sweetness that KRUK fails to capitalize on. It stops on an abrupt note, but at least they pick up the pace before you have too much time to cry foul. The SAGA-esque drive of "It's Gone" is a bright spot, but vocalist Tomasz Wisniewski, who holds himself together for more than half of the album, nearly gets dusted by the up-tempo pace of "It's Gone" and he struggles a bit. Piotr Brzychcy bails him out with a rad solo, as he does during the explorative YES-like outro intercutting the straightforward hum of "On the Station". On the other hand, Wisniewski is on the money during the album's ballad, "At the Desert". Don't act surprised. You knew there'd be at least one, come on.

What KRUK attempts to do is hardly offensive. They might make a better impression, however, if they were to fang things up beyond the chewy artwork of "Be 3"'s packaging. This does NOT include random demon growls, however. Save those for the other KRUK. Occasional timing squibs and a feeling of checking out when their songs hit momentum haunt this KRUK on "Be 3", while their fusion-hinted salute to PURPLE on "Child In Time" is mostly superb outside of Wisniewski's un-Gillan-like yowling, yowza.

Perhaps this band should spend a few days studying TYGERS OF PAN TANG's "Spellbound" on their next trip so they can round out their retro sound with more resolution.