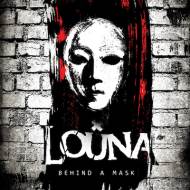 There's been a dramatic mutiny with the state of rock in Russia at the forefront if you've been keeping tabs on the PUSSY RIOT fiasco. While there's been numerous rock and metal artists over the past few decades from the west who have set foot upon the turf of Mother Russia with their wares, an actual homegrown scene has been a gradual process. Now, one of Russia's mainstream rock hopefuls, LOUNA, has crossed over to the global market and they're sure to make a dent wherever they go in support of their third album "Behind a Mask", largely due to the fireball presence at their center.

Lousine (aka Lou) Gevorkian frequently carries an undeniable vocal resemblance to Doro Pesch, while her supporting cast (Rouben Kazariyan, Sergey Ponkratiev, Vitaly Demidenko and Leonid "Pilot" Kinzbursky) plays not in the thread of WARLOCK, but a contemporary chunk 'n drive power rock motif you've pretty much heard on the hour via FM radio. Toasts of their homeland scene and subjects of a forthcoming MTV documentary about worldwide protest music, "Rebel Music", LOUNA's name is sure to crop up in the rock press and likely the summer festival circuit. Likewise, it seems an inevitability this band will soon find themselves opening for the likes of NONPOINT, PAPA ROACH or SKILLET.

No matter who she resembles vocally, Gevorkian is a natural talent. Not every ounce of her performance mirrors Doro Pesch, and that's to her credit. Reportedly, only 10-15 seconds of her vocals on this entire album needed a polish in the final mix. The simplistic agro rawk comprising "Behind a Mask" will appeal largely to casual tastes, while the holier-than-heavy will quickly take a hike from this album despite Lou Gevorkian's appealing delivery.

The band donated one of their previous songs "The Time of X" to a benefit album engineered for PUSSY RIOT's defense fund, and their differentiating factor as a future commercial rock commodity comes in their defensive-minded lyrical department. There's a bit more social conscience to "Behind a Mask" as LOUNA sounds off about numerous topics. On "System Destroys", Gevorkian rallies her troops not only in the fight for rock where she comes from, but for rock music at-large, even turning sights upon rock's biggest threat, the hip hop industry. A scathing indictment of profiteering in the name of religion is called out on "Business" and "Storming Heaven", proving the topic is ever-reliable in hard rock decades after the Jerry Falwell scandal.

While a continuous ply against the existence of an actual god filters throughout the album (most affectingly on "Up There" and "The End of Peace"),what Lou Gevorkian has in common with Doro Pesch aside from a ripping tigress cadence to her pipes is the unashamed wherewithal to stand tall in the name of rock. The anthemic "My Rock 'n Roll" and "Let's Get Louder" need no further explanation, while "Mama" is an amusing quasi apology from Gevorkian to her mother for who she and her bandmates are. Coming from a band that perhaps faced more challenges than their peers overseas, it's less blas? when Gevorkian rattles off about ALICE IN CHAINS, PEARL JAM, OZZY, THE BEATLES and THE SEX PISTOLS propagating a future destiny in that which parents will never fully understand.

Doro Pesch's reign as the Queen of Metal began just before the fall of the Berlin Wall, while Gevorkian's generation has come up within the infancy years of a post-communist Russia. There's a certain empathy between both ladies that's palpable, yet Gevorkian and LOUNA face a much more crowded rock market than Pesch and WARLOCK confronted in the eighties. Where LOUNA makes a difference from the FM-bred rock clique they're destined to join is that "Up There" is heavier in sound and subject than any of their contemporaries. It's the most metal track on "Behind a Mask", and for LOUNA's purposes, it gives them a sense of substance to counter a large portion of ordinarily-structured numbers. Fortunately for them, there's nothing ordinary about Lou Gevorkian or how far the band has come against adverse conditions. However much of an impact they make upon their targeted North American market, LOUNA looks and sounds like they're living the dream. Projecting that sense of confidence says more about them than anything.