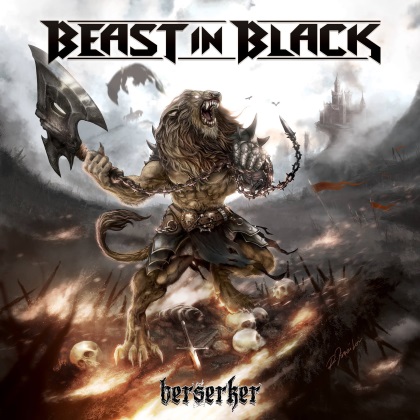 Hot on the heels of BATTLE BEAST's solid "Bringer of Pain" release earlier this year is the debut of former member and main songwriter Anton Kabanen's new, similarly named project: BEAST IN BLACK. The guitarist wanted to keep the beast alive within his new act's moniker to send a message that he would be carrying forward with his musical vision following his split from BATTLE BEAST. "Berserker" proves this, and Kabanen's new band doesn't take any left turns. This album picks up where he left off with BATTLE BEAST, for the most part, anyway.

Interestingly and ironically enough, "Berserker" mirrors the manner in which BATTLE BEAST itself has loosened its tight grip on "pure" metal aesthetics. Critics and social media warriors can battle out the notion that Kabanen is riding his former band's coattails, however, there's a greater likelihood that the less overtly heavy metal presentation was simply his natural and arguably inevitable evolution as an artist. After all, the guitarist was BATTLE BEAST's primary songwriter and founder. And while BATTLE BEAST's newest release found it adopting noticeable hard rock stylings, and even an awkward albeit singular splash of nu-metal, BEAST IN BLACK seems to retain much more of a power metal aesthetic that seems inherent to Kabanen's work.

Aside from a few slower songs, like the majestic ballad "Ghost In The Rain", "Berserker" is replete with crystal clear, slick, charging pop metal. Stadium and radio-friendly melodies weave in and out of the guitar, vocal and synth work. Sure, synthesizers are utilized effectively toward this end, but they are simply overused throughout the album. When the synths are on point, as with the JUDAS PRIEST meets EUROPE flavor of "End Of The World", the results are simply epic.

There doesn't appear to be any love lost between Kabanen and his former BATTLE BEAST bandmates, but since leaving that band in 2015, the guitarist assembled a new band that can give the former a run for its money. It took a year for this debut to come together, but "Berserker" reveals BEAST IN BLACK as a well-oiled machine firing on all cylinders. For fans of anthemic, popular, synth-driven heavy metal, there are now two standout bands where there was once one. In that sense, everyone wins.