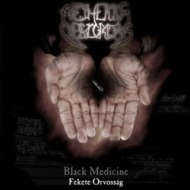 Here is one that almost escaped the detection of my radar system. If you appreciate well written black metal that is relatively diverse and tuneful, yet still in touch with the style's barbaric roots, then "Black Medicine / Fekete Orvosság" from Hungary's AETHERIUS OBSCURITAS is the album for you. You can take that to the bank or just replace the preceding statement with the cliché of your choice and then wade through the monetary choice stratagems.

Hardly surprising these days is the fact that "Black Medicine / Fekete Orvosság" is largely the work of one person; the man they call Arkhorrl who wrote the music and penned the lyrics (except for the two covers),and played almost every instrument (Zson is credited with "battery" and a few guest appearances are made),as well as producing and mastering it. And a bloody good show of it he made, as the album is thoroughly enjoyable both as a primal black metal experience and a musical journey that remains fresh without careening into art-house drivel or shoe-gaze atmospherics. It is the combination of mild experimentation, reasonable musical forays, and a flow that keeps things moving along at a crisp pace, all of which is shoehorned into a just-right 40-minute box that is the secret to the album's success. Any esoteric leanings are slight at most and never detract from a black metal base.

"Black Medicine / Fekete Orvosság" is what one might call evenly balanced. The spirit of the ancients (BATHORY, etc.) lives on in an album boasting its fair share of hellfire racers and reckless jaunts, yet tunefulness never disintegrates into a mess of distortion and drum pedals. For example, "Fagyos Ölelés / Freezing Embrace" incorporates pitch-black blasting with death metal elements and folk nuggets, all of which is delivered through effective pace shifting. Some songs (e.g. "Passed out of Sight – Passed out of Mind" and "Circinus Nebulae") invigorate with folk-based singing (directly and in support),others inspire with grandly majestic instrumentation, including counterpoint and/or supplementing bass playing ("The Moon Shield"),and some just find a groove and work it ("Zord Mosoly / Grim Smile"). The cover choices of MARDUK's "The Black Tormentor of Satan" and RUNNING WILD's "Black Demon" (the bonus track) work equally well, the former in particular fitting right in with the originals.

What more can be said? Arkhorrl is to be applauded for his creation. At the risk of permanent banishment from the community of black metal scribes (check out our MySpace page),I even found "Black Medicine / Fekete Orvosság" to be rather, um, fun. Or maybe that is just appreciation for the music manifesting itself through a smile rather than a grim facial expression.