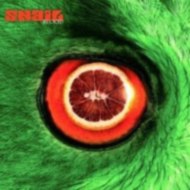 SNAIL apparently took a 16-year break after their first album and EP, before resurfacing, adding a guitarist, and finally putting their own "Chinese Democracy" down on tape. Hey fellas, you're just in time for the death of the music industry. Pull up a chair!

The stock in trade here is stoner rock, if the Meteor City nameplate didn't tip you off, but SNAIL have a bit more going on under the hood. Their sound is steeped in accessible, fuzzed-out grunge, but there's a whole lotta doomy sludge and psychedelic space-rock haze here too, recalling everything from early MONSTER MAGNET and old SOUNDGARDEN to near-forgotten cult psych-garage freaks like TRULY. The combination is cool as hell, with plenty of long, dirge-y slow parts and lysergic interludes, but enough rocked-out upbeat sections to keep things from getting too navel-gazey and dreary.

Mark Johnson has that laconic, sleepy sort of vocal you usually find in shoegazer bands (or the DANDY WARHOLS),and even his more aggressive shouts have a laid-back quality to them. It's a good fit for the music, back far enough in the mix for the riffs to take center stage, where they rightfully belong in this scenario. This is why, despite a very accessible and catchy streak throughout the music, "Blood" is still such an atmospheric, immersive, ultimately heavy experience, a syrup-veined trip through dark and swirling vibes with just a hint of that California breeze to keep things moving.

While children of the '90s will certainly dig SNAIL, don't use their back story to write them off as dated flannel rehash — "Blood" is as vital and relevant as anything coming out of this scene today. Fans of FU MANCHU, NEBULA, SLEEP, LOVE BATTERY, MUDHONEY, hell, anyone who likes a little doom in their grunge and gets off on huge tones and good tunes will be way into these guys. Thanks for bringing it back to life, fellas... let's hear some more!