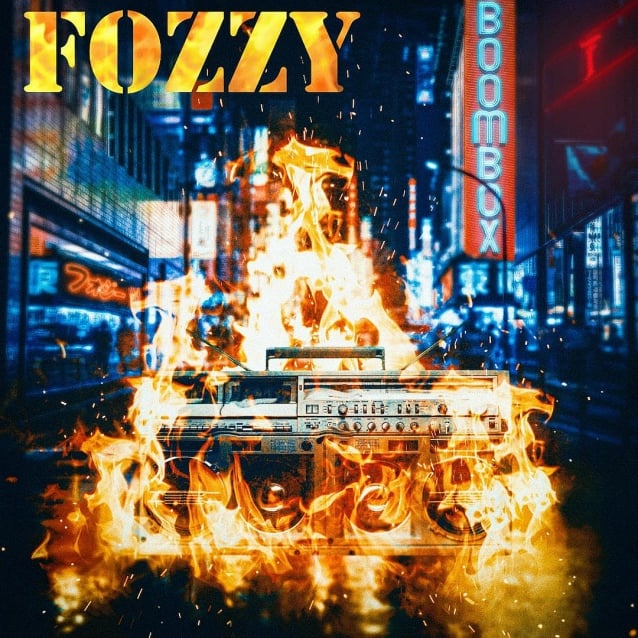 What was once widely viewed as a fun side project for a famous wrestler has long since evolved into something more substantial and enduring. 22 years on from their debut, FOZZY are a long-established part of the metal furniture, and vocalist Chris Jericho still appears to be having the best imaginable time, all the time. "Boombox" is the band's eighth album, and it is as subtle and restrained as its title suggests.

While the first couple of FOZZY records focused on cover versions and a swaggering, traditional strain of heavy metal, "Boombox" feels like the culmination of the straightforward evolution the band have undergone over the last two decades. Fans of guitarist Rich Ward's seemingly endless supply of great riffs will be more than happy with large chunks of this record, but the prevailing mood is of a more radio-friendly but still heavy blend of alt-rock and (somewhat self-consciously) cutting edge pop sensibilities. It's summed up smartly by opener "Sane", which erupts with a huge Ward riff and plenty of bombast, before Jericho's melody takes the song into modern mainstream pop-rock territory, with heavy shades of LINKIN PARK. If that formula sounds like your kind of thing, then "I Still Burn" repeats the template. The first two songs are slightly misleading, however, and FOZZY have the collective good sense to mix things up thereafter. Heavier and grittier than most of its counterparts, "Ugly On The Inside" is a fierce flash of pomp and intensity, with a theatrical, dynamic arrangement and a faint whiff of devilry; "What Hell Is Like" thuds and slams with tangible SABBATH-ian power; "Omen" is intermittently gothic and creepy, with a KORN-like sense of melodrama and a killer chorus; the closing "The Vulture Club" is punchy post-grunge with a particularly strong Jericho vocal. FOZZY allow themselves one ballad: "Army Of One" is undeniably schmaltzy and cliched, but also rather sweet and memorable.

The only real curveball here is a cover of FRANKIE GOES TO HOLLYWOOD's global '80s smash "Relax", which proves to be an inspirational choice that fits perfectly with the songs around it. It is slightly surprising that FOZZY would cover a song that is an overt and notorious paean to gay sex, but to their credit, the Americans' play it entirely, erm, straight, and the results are eerily close to the original, crunchy guitar tones aside. Life is full of surprises.

It is still true that the best way to experience FOZZY is at an open-air festival, where Chris Jericho's irresistible personality and showmanship elevate everything to another level, and the band's biggest anthems make a lot more sense. Nonetheless, "Boombox" is a worthwhile addition to a catalogue that has already outstripped all expectations.